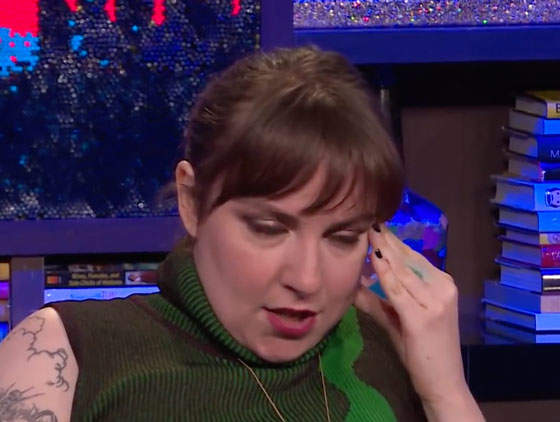 I figured the first rule of Taylor Swift friendship was you don’t talk about Taylor Swift friendship, but Lena Dunham doesn’t play by rules. When she was on Andy Cohen’s shit-stirring show known as Watch What Happens Live, she was asked to play “Plead The Fifth” with fellow guest Maggie Gyllenhaal. While her answer for who was the most misogynistic in Hollywood (Daniel Tosh for body shaming her), even I let out an anxious squeak when Andy asked Lena to say who was her least-favorite Taylor ex…while she sat next to the sister of one of Taylor’s exes!

E! News says Taylor probably has no reason to send down a horse’s head to Lena’s house or force her to hang out with people like Jaime King because Lena managed to give a pretty PR answer, as evidenced by Maggie looking pretty bored throughout the whole thing:

“I want to do right by her on this question—and I’m also proud, because I haven’t pled the fifth on any of these and I think that makes me some kind of champion! My least favorite was ‘Calvin Harris,’ because I felt he was petty in the public and who needs to do that?”

Unfortunately, I’ve seen enough of  that show to know Lena isn’t some sort of champion just for answering all of Andy’s questions; however, she is a champion of petty about Calvin’s petty by doing his DJ name in air quotes. Ha! Show that boring straight, white turd burger DJ who’s boss, Lena! Anyway, Lena is alluding to the fact that she didn’t think it was very nice of Calvin to go on that Twitter rant about Taylor after they broke up and it emerged she was a ghost writer on “This Is What You Came For.” I’m sure Karlie Kloss has the same feeling since he elbowed her ass out of a proper birthday Instagram! What a selfish Scot! You can see the whole thing from last night right below:

Tags: Lena Dunham, Taylor Swift
SHARE
Our commenting rules: Don't be racist or bigoted, or post comments like "Who cares?", or have multiple accounts, or repost a comment that was deleted by a mod, or post NSFW pics/videos/GIFs, or go off topic when not in an Open Post, or post paparazzi/event/red carpet pics from photo agencies due to copyright infringement issues. Also, promoting adblockers, your website, or your forum is not allowed. Breaking a rule may result in your Disqus account getting permanently or temporarily banned. New commenters must go through a period of pre-moderation. And some posts may be pre-moderated so it could take a minute for your comment to appear if it's approved. If you have a question or an issue with comments, email: [email protected]
src="https://c.statcounter.com/922697/0/f674ac4a/1/"
alt="drupal analytics" >