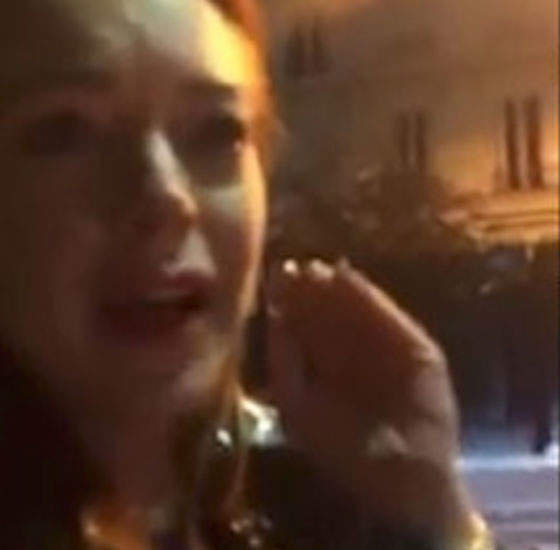 No, the couple wasn’t composed of two of her ex-fiances. Lindsay Lohan took us on a crackers, 10-minute long Instagram Live journey in Moscow where she chatted up a homeless family, offered them a free night in a hotel, and then snapped and accused them (in both English and what was supposed to be Arabic) of trafficking their children. And then she tried to grab one of their kids away! The mom wasn’t having it and removed Lohan from her sight (much like Hollywood did). Except she used her fists. She probably knew that Lindsay once skipped out on her $46,000 Chateau Marmont bill and figured “why would I bring my family to her hotel when they’re probably trying to kick her ass out for non-payment?”

As viewed by TMZ, LiLo climbed out of what was probably her latest trick’s car in the video, and informed her audience that the family (a man, a woman, and two small children) were Syrian refugees who needed her help.

LiLo, who sported a clown mouth and sounded like her vocal cords had been reduced to ½ their usual speed, is back on the foreign accents again. This is despite her hailing from Dina Lohan’s vagina which is primarily located in Long Island.

Lohan approached the couple and morphed into a badger, asking the woman if she could put the family up for the night. Repeatedly. The woman shook her head. Also repeatedly. When her offer of a free nights’ stay was declined and the family tried to escape her crazy, she followed them, and accused them of “ruining Arabic culture” (“So are you.” – Arabic culture) and trafficking their kids. Unfortunately for the Five Below version of Angelina Jolie, she presented no evidence to back that up.

Fun fact about the Arabic that Lindsay Lohan is speaking in the video: Twitter user Abdi helpfully informs us that the words Lohan bellowed came straight from the back cover of Rosetta Stone: Broken Arabic.

I don’t even speak Arab and I can tell you she’s not saying shit besides praise god, by the will of god and I swear to god over and over again.

The weird accent/dialect she’s using is called “I studied abroad once and now speak English like it’s my second language.”

That’s when the patron saint of yacht girls revealed that she was probably fucked up on something by chasing the family down the street and informing them that she “will walk forever”, following them throughout the universe until justice was served. Crazy was on a crusade! That threat would absolutely make me pass my children to her if she would just leave me alone.

Lohan continued to taunt and stalk them while weaving in and out of several lanes on the Foreign Accent Highway (via Vulture).

“Look what’s happening,” she announces. “They’re trafficking children.” Later Lohan threatens, “I won’t leave until I take you. Now I know who you are. Don’t fuck with me.”

“Is he your son? From Pakistan? Don’t fuck with Pakistan!”

And that’s when she went for one of the kids, saying “give me him.” (viaTMZ)

After tailing the family for a bit and trying to take the children, you see the mother snap and attack Lindsay, socking her in the face.

The vid ends with a tearful Lindsay saying she was trying to save the boys.

I’m wondering if all the shit she’s gonna get for this tomorrow was worth the cute Instagram post she thought she’d get out of putting a homeless refugee family in a hotel. Now she looks like an attempted child kidnapper and an asshole shaming parents for being homeless.

It also ended with Lindsay Lohan weeping “I’m so scared!” to the camera when this maniac just harassed a family and tried to kidnap their child. That family was probably scared, too, Lohan, you child-snatching, whimsically-accented wackjob!

You can watch all of the insanity below.