Piers Morgan Attacked Cosmopolitan UK For Putting Tess Holliday On Their Cover, As Viewers Of His Morning Show Call For His Firing 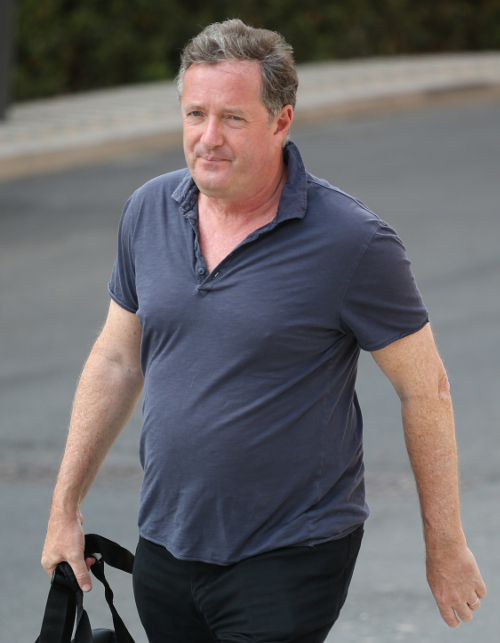 Imagine waking up to Piers Morgan’s face every morning. Gross, right? Well hundreds of thousands of Good Morning Britain viewers do, and a lot of them aren’t too happy about it. Piers is a boorish, shit stirring drama queen. Who needs a dose of that before coffee, especially in #thesetryingtimes? For example, he recently took time out of his holiday to make a lazy attempt to fat shame American model Tess Holliday for making it to the cover of Cosmopolitan UK. Meanwhile on an unrelated note (I think), GMB viewers are really digging his stand-in, Adil Ray, and are asking for him to replace Piers permanently. I don’t even know the guy, but point me to the petition and I’ll sign on general principle.

About Piers’ most recent foray into misogyny, here’s the Cosmo cover that caused Piers’ tighty whities to shrink 5 sizes, squeeze his little balls, and give him a massive wedgie.

TMZ reports that Piers posted the following on Twitter in response to Tessa’s cover:

“As Britain battles an ever-worsening obesity crisis, this is the new cover of Cosmo. Apparently we’re supposed to view it as a ‘huge step forward for body positivity.’ What a load of old baloney. This cover is just as dangerous & misguided as celebrating size zero models.”

God knows there is nothing more dangerous than a woman in a swimsuit (psst: we keep knives in them). Too bad you can’t fat shame somebody who isn’t ashamed to be fat. I’m sure Tessa’s not pressed by Piers’ barbs. She’s no doubt heard it all before, and a blowhard like Piers isn’t about to break her stride. But his comments are indicative of his combative negativity which many GMB viewers are currently enjoying a break from in his absence.

Birmingham Live reports that GMB fans are “begging for Adil Ray to replace Piers Morgan permanently”. They say Adil is a “clever, sharp, handsome professional“, 4 things you never hear said about Piers. Here are a couple of things GMB viewers have been saying on Twitter:

“Anyways it’s a break from all that screaming and one sided opinions / debates that we r subjected to..#piersmorgan is on a break..”

Adil himself even stepped into the foray.

Meanwhile, Piers is off sulking on the beach.

I can’t stomach any more Trump Derangement Syndrome, Brexit hysteria, Omarosa bullsh*t or ‘Madonna inspired me to be f***ing annoying’ birthday tributes.
Frankly, I’m bored witless by all YOUR opinions…and by MY opinions.
So I’ve gone to this beach for a Twitter detox. Bye. pic.twitter.com/owL2Vlye0P

Watch those riptides, buddy. They can be almost as dangerous as big women in swimwear!

Tags: Piers Morgan, Unpopular
SHARE
Our commenting rules: Don't be racist or bigoted, or get into long-ass fights, or go way off topic when not in an Open Post. Also, promoting adblockers, your website, or your forum is not allowed. And some comment threads will be pre-moderated, so it may take a second for your comment to show up if it's approved.
src="https://c.statcounter.com/922697/0/f674ac4a/1/"
alt="drupal analytics" >