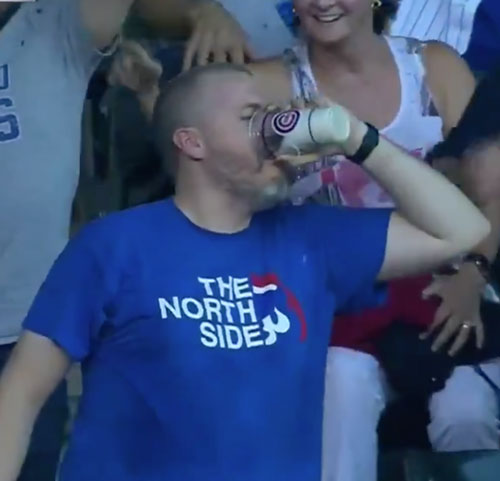 The Cubs fan who caught a foul ball with his beer and then chugged it all in a nipple-hardening display of manly victory!

Baseball fans and I have something in common. Sure, they’re the weird kind of human who enjoys using their hard-earned coins to pack themselves into a stadium filled with fellow sweaty loud messes to take a drunk nap while grown men in leggings that could be tighter throw some ball around. But like me, they love beer and balls, and the two came together during a Cubs v. Mets game at Wrigley Field in Chicago yesterday.

I couldn’t find any actual video of the ball fucking that fan’s cup of beer (Side note: How did that stadium not fill with dick leche and crotch cream from baseball fans watching a baseball make love to a cup of beer?), but they tell me that Anthony Rizzo of the Cubs hit the foul ball that flavored that man’s yeasty sweet nectar. The fan pulled off his cap and saluted before chugging it all. If Gaston from Beauty and the Beast was a Midwest suburban Cub fan dad, this would be him. Behold, A MAN!

#Cubs Fans showing good form in the 1st inning at Wrigley. Foul ball in the beer cup…and you know the rest #EverybodyIn pic.twitter.com/BfYoHN9ob8

But seriously, the good thing is that whatever germs were on that ball, they got killed by the booze. That is why I dip every ball that goes into my mouth into a cup of booze beforehand. “Errr, are you sure that it’s not the other way around and the ball owner douses your filthy mouth with booze beforehand?” – you)