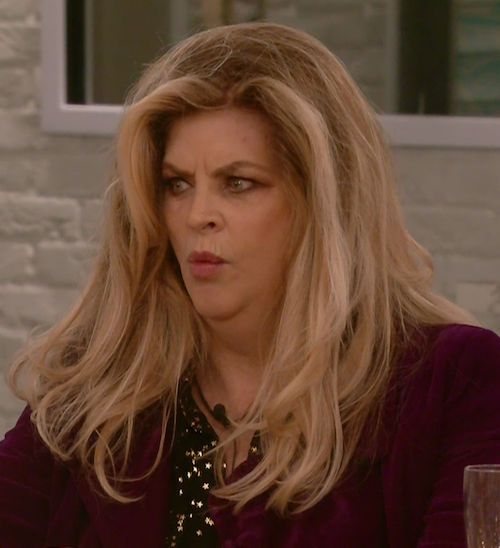 We’ve all had a little too much and hallucinated some shit from time to time. Hell, I’m still not 100% convinced it wasn’t my childhood dog (who would be 35 today) standing outside the bar I stumbled home from last night. Kirstie Alley is apparently hard for a check and agreed to be in the Celebrity Big Brother house in the UK. In a moment of everyone’s favorite game of name dropping, Kirstie told her housemates how she’s friends with Courtney Love and that when she went over to her house for “snacks” one day, and met Prince Charles. Girl, what kind of snacks were those?!

People says Kirstie had already mentioned how she had previously met Robert De Niro, Al Pacino, and Leonardo DiCaprio. Alas, those names are big but she also needed to win over the London crowd, so she went with a story of how she once had dinner with Elton John:

“I’m friends with Courtney Love and one time she asked me to dinner and when I came — what’s his name? Oh my god — Elton John was at dinner. And there was only four of us.”

I guess that’s an okay story, but it would have been better if the mysterious fourth person was someone the Brits truly cared about like, I dunno, Mr. Bean? Anyway, Kirstie was there to play because then she took it a step further:

“Then another time she asked me over to her house for ‘snacks,’ and Prince Charles was there.”

Snacks?! Prince. CHARLES?! Everyone in Buckingham Palace is ducking today because THE QUEEN is PISSED she has to spend all this time with Camilla when she could have been spending winters at Balmoral singing her favorite Hole songs!

Oh, Kirstie. What were in those “snacks,” girlfriend? This is why years of Jenny Craig is dangerous – those snacks start fucking with your head! If I had to guess, I bet the good shit was just making Courtney’s walls turn into Prince Charles faces like how people back home always see the face of Jesus in a Red Lobster Cheddar Bay biscuit. Prince Charles’ official office, Clarence House, hasn’t commented on the accusation, likely because they’re split between fits of laughter and fits of jealous rage because Charles got to hear all sorts of Cheers behind-the-scenes drama if this shit is true! Most people are kind of looking at this with the heftiest of side-eyes, but I think this sums it up best:

What snacks was Courtney having with Prince Charles?! #cbb pic.twitter.com/sZmrRRl0Vu

Tags: Celebrity Big Brother, Kirstie Alley, Prince Charles
SHARE
Our commenting rules: Don't be racist or bigoted, or post comments like "Who cares?", or have multiple accounts, or repost a comment that was deleted by a mod, or post NSFW pics/videos/GIFs, or go off topic when not in an Open Post, or post paparazzi/event/red carpet pics from photo agencies due to copyright infringement issues. Also, promoting adblockers, your website, or your forum is not allowed. Breaking a rule may result in your Disqus account getting permanently or temporarily banned. New commenters must go through a period of pre-moderation. And some posts may be pre-moderated so it could take a minute for your comment to appear if it's approved. If you have a question or an issue with comments, email: [email protected]
src="https://c.statcounter.com/922697/0/f674ac4a/1/"
alt="drupal analytics" >