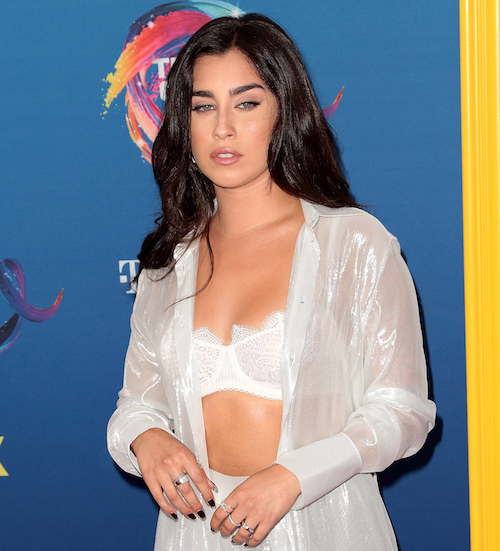 During Tiffany Haddish and Kevin Hart’s little monologue at the beginning of MTV VMAs on Monday night, she made a crack about the members of Fifth Harmony, who weren’t there, when talking about multiple-nominee and former Harmony Camila Cabello. Some people might have been laughing, but one of them wasn’t former Fifth Harmonizer Lauren Jauregui.

Around the 3:07 mark, Tiffany points to Camila Cabello (or “Camille Caba-laylo” in Tiffany speak), says she’s been nominated for five awards, then adds: “So those of you watching at home – hi Fifth Harmony!“.

The #VMAs are so big that we couldn't just call one comedian, we needed both @KevinHart4real AND @TiffanyHaddish ??? pic.twitter.com/COMO8GYQKx

When Nicki Minaj got on stage to accept the award for Best Hip Hop, she turned to Tiffany and said: “Don’t be coming for Fifth Harmony because Normani is that bitch.” The next day, Nicki defended Normani further on her Beats 1 Radio show Queen Radio, saying:

“Last night at the VMAs, I said Normani is that bitch. Because she is. And I won’t allow anyone to disrespect a black woman in my fucking face. I’ve had it with this shit.”

Lauren agrees. Yesterday, Lauren hopped on Twitter and slapped at no one in particular (even though, yeah, it was totally Tiffany).

Waiting for the day when supporting one successful dope woman does not mean insult to other successful dope women. There is energy and space for us all to beautifully coexist and bless the world with our individual truths, stories and talents.✨?✨

Although Lauren probably didn’t appreciate that I insinuated that her tweet was aimed at Tiffany.

Incredible even a tweet about uplifting can be misconstrued as shade?? I give up y’all, talk all the shit you want?

This must be a strange moment for Tiffany. Usually she’s the one reporting on famous people’s fights, and right now she’s in the middle of one. Tiffany vs. Some of Fifth Harmony! Except Lauren might have just invited a bigger headache into her life by instructing everyone to “talk all the shit” they want. Tiffany doesn’t let a fight die, and she might keep dragging Lauren and the other harmonies on the next mic Tiffany gets her hands. “I would have made a Fifth Harmony joke and said ‘those of you working from home’ but you know most of them are barely working. Ha, see you on Twitter, Lauren!”

Tags: Camila Cabello, Fifth Harmony, Lauren Jauregui, MTV VMAs 2018, Tiffany Haddish, You Pissed Somebody Off
SHARE
Our commenting rules are pretty simple: Don't be racist or bigoted, or go way off topic when not in an Open Post. If you see an offensive or spammy comment you think should be deleted, flag it for the mods and they'll be forever grateful and give you their first born (although, you probably don't want that).
src="https://c.statcounter.com/922697/0/f674ac4a/1/"
alt="drupal analytics" >