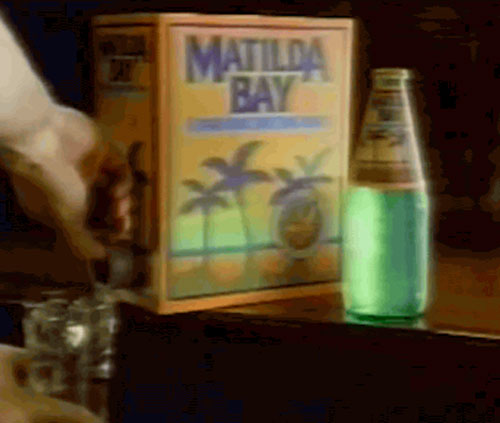 If you’re a newbie Australian drag queen in search of a name, snatch up “Matilda Bay” while you still can. If the 1980s had a urethra and a bladder, it would piss out wine coolers. Wine coolers were the sweet nectar of the 1980s. If you were a genteel pearl who lifted their delicate pinky up when they sipped their wine cooler, you preferred Bartles & Jaymes. If you were a messy slut who liked to chug on something sweet after sucking sandy random dick under the pier on a Florida beach, you preferred Sun Country. And if Crocodile Dundee spoke to you on a deep level and Kylie Minogue’s Loco-Motion was your favorite song, then you loved to wet your tongue with Australia’s own (that’s a lie) Matilda Bay!

Matilda Bay wine coolers even came in a box. The booze-drinking growns of the 1980s really let humanity down by not making Matilda Bay a hit. How could they not embrace something as insanely elegant as wine coolers in a box? Whenever some dumb trick says to me, “Everyone was so tacky in the 80s,” I’ll probably have to begrudgingly agree with them since Matilda Bay, the epitome of wine cooler sophistication, was a flop.