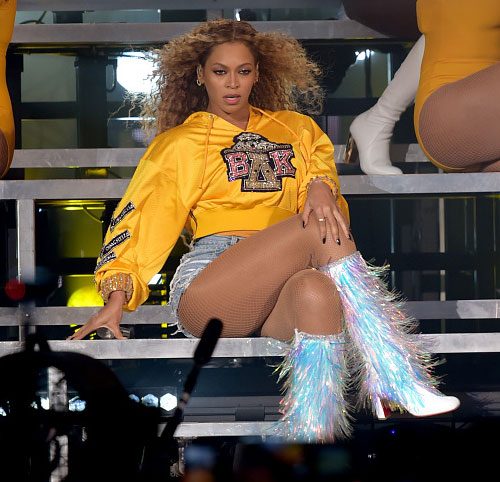 The exquisite iridescent Christmas tree tinsel boots that Beyoncé wore in the Beychella performance that is responsible for the death of millions of BeyHivers!

CNN reported this morning that coffin sales rose eighty-million percent in the middle of the night, and that’s because every member of the Hive immediately purchased one to throw themselves into after their God destroyed them. Actually, that doesn’t make sense. A BeyHiver wouldn’t buy a casket. They’d get cremated and have their family members spread their ashes on the new Western holy land that is now known as Beydio, Beylifornia in the Beychella Valley.

Beyoncé and her unstoppable weave ruled Coachella last night in a musical extravaganza that included approximately six hundred thousand back-up dancers, a marching band, several costume changes, a mid-show nail color change, a “suck my balls!” chant, the fan section of a million Home Depots, a light show that’d make any raver bliss themselves into the ether, a Destiny’s Child reunion, a very important cameo by the legendary BASEMENT BABY, and those disco Yeti boots! (Oh yeah, and Jay-Zzzz was there too, if you’re the one person who cares about that.)

Beyoncé’s performance (and many others) streamed live on YouTube, and it seemed like her team put together the show mostly for the BeyHivers watching at home than the over-baked hipsters at Coachella. There was a long runway that went from the stage into the crowd, and she started her performance at the end of that runway. So either her “big entrance” for the crowd was casually walking to the end of the runway to take her opening number spot, or there was some kind of trap door situation at the end of the runway, or Solange distracted everyone with her moves (I’m going with that, but I think it was the second one). Beyoncé’s first outfit was a look that Nefertiti would wear if she was the drum major of Liberace University in Las Vegas.

Before one note came yodeling out of her mouth, she changed into a Coochella staple (coochie cutters) and today’s HSOTD: a gorgeous pair of boots that Crystal Barbie would wear if she decided to get a part-time job as a go-go dancer. Those boots may look like they were made using discount Christmas tree tinsel bought in January, hot glue, and Salvation Army white boots, but Balmain made them for Beyoncé. So one strand of tinsel probably costs more than my entire life.

Beyoncé, who is now the first black woman to headline Coachella, and her army of dancers and musicians spent over 2 hours paying tribute to black America, black girl magic, and feminism. She sang out the Black American National Anthem, and shouted out the perfect chant to do when someone cuts you off in traffic.

As expected, Beyoncé continued to be the saint she is by graciously throwing checks at Kelly Rowland and Michelle Williams. Destiny’s Child rose from the stage, and delivered in sparkly camo. But Poor Michelle™. Tina Knowles obviously sewed her outfit backstage in 3 minutes using scraps from Beyoncé’s and Kelly’s costumes.

THEN THERE WAS THE STAR OF THE SHOW: BASEMENT BABY!!! Solange ran out on stage like a peroxide-dipped dance machine on meth and busted out a tornado of raw talent while wearing a two piece made of Hefty bags.

Meanwhile, as Beyoncé was getting all the attention from the Internet, Kim Kartrashian called an emergency meeting with Pimp Mama Kris to ask which up-close picture of her bleached asshole she should tweet.

And I was joking about the BeyHive dying last night. They have to stay alive until at least next weekend, because she’s doing it all over again on April 21st. They also need to stay alive for another reason. Beyoncé kept telling the crowd that she couldn’t hear them and called them out for not singing along. (How rude of Beyoncé to interrupt those hipsters as they took selfies and snorted molly off of each other’s flower crowns.) So the BeyHive is going to use their investigative skills to track down every single audience member and viciously attack their IG pages with bee emojis for ignoring their Beyssiah.

Also, RIP to whoever is responsible for Beyoncé’s sparkly camo boots slouching.