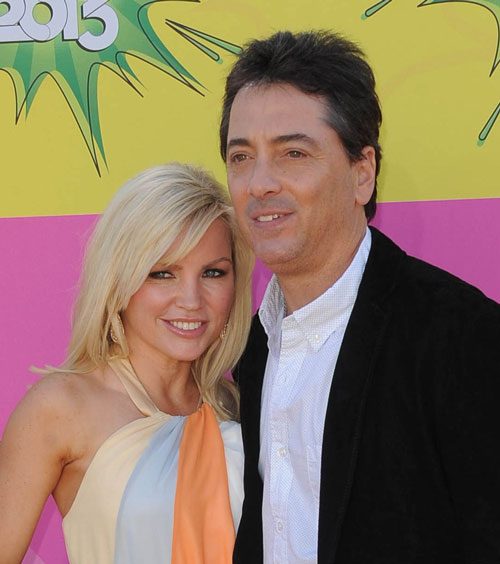 HuffPo is reporting that alleged pre-teen boy’s dressing room glory hole architect and Trumper Scott Baio’s wife and Facebook Live coacher Renee Baio has revealed that she has a “microvascular brain disease.” Renee has also said that she has two “meningioma brain tumors.”

When someone Twitter asked Renee how she’s doing health-wise, she tweeted that she’s got a disease that “involves changes to small blood vessels in the brain and the worst cases can impair cognitive function and balance, and cause strokes and dementia.”

Besides having 2 meningioma brain tumors, in Oct 2017 I also learned I have Microvascular Brain Disease. @Jerseyshore06

Ouch. Scott, who has recently had a police report filed against him by former Charles in Charge co-star Nicole Eggert for allegedly sexually abusing her from ages 14 to 17, tweeted support for his wife.

Unfortunately, this is true. Renee is forever my rock, my life & my soulmate! Toughest person I know. @MrsScottBaio https://t.co/fyMtMl8MGX

That’s sweet. However, this is all interestingly timed. Another former Charles in Charge cast member, Alexander Polinsky, has also recently come forward backing up Eggert’s story. He’s claiming that, in addition to walking in on underage Nicole sitting on Baio’s lap one day, Trump’s most famous celebrity fan also pulked shit like drilling that aforementioned gloryhole into his dressing room wall and sticking his allegedly “tiny dick“ through it at him. He also claims Baio verbally assaulted him for years on the set. (This is in addition to claiming Chachi once threw hot tea in his face before filming a scene.)

The cynic inside Baio haters is saying “sick wife = public sympathy during sex scandal.” But Renee’s had her troubles.

Renee used to work as a stunt woman and had a “massive brain injury” in 1992 in a jet skiing accident, Scott Baio told The Blast.

“We don’t know if her tumors and this new disease have anything to do with this,” Baio said.

In addition, Renee is also reportedly a breast cancer survivor.

It’s not known how Renee’s been treating her two meningioma brain tumors, which are traditionally very slow-growing. Her first step, however, should be treating that third tumor. And by “third tumor, I mean “that husband.”

Tags: Alexander Polinsky, Nicole Eggert, Renee Baio, Scott Baio
SHARE
Our commenting rules: Don't be racist or bigoted, or post comments like "Who cares?", or have multiple accounts, or repost a comment that was deleted by a mod, or post NSFW pics/videos/GIFs, or go off topic when not in an Open Post, or post paparazzi/event/red carpet pics from photo agencies due to copyright infringement issues. Also, promoting adblockers, your website, or your forum is not allowed. Breaking a rule may result in your Disqus account getting permanently or temporarily banned. New commenters must go through a period of pre-moderation. And some posts may be pre-moderated so it could take a minute for your comment to appear if it's approved. If you have a question or an issue with comments, email: [email protected]
src="https://c.statcounter.com/922697/0/f674ac4a/1/"
alt="drupal analytics" >