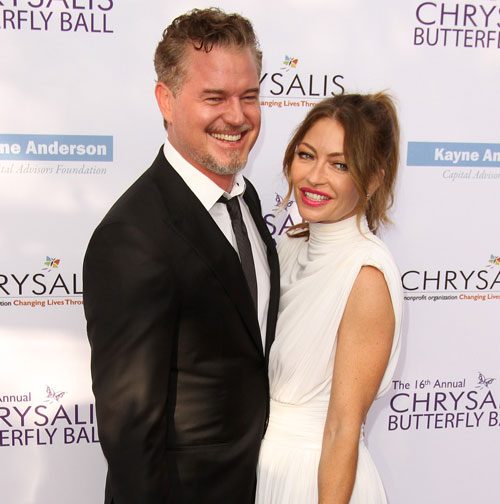 Maybe she finally watched their sad semi-threesome video with a former Miss Teen USA and decided to look at her life, look at her choices?

Vehicular boogeyman Rebecca Gayheart has filed for divorce from her husband of 14 years, Eric “Dr. McSteamy” Dane. TMZ says that Rebecca filed on Friday, and is asking for spousal support as well as joint legal and physical custody of their two daughters, Billie, 7, and Georgia, 6.

Becky has had a rough time post-Y2K. In 2001, she was reportedly chatting on her phone when she struck and killed a 9-year-old boy walking home from school. She pled guilty to manslaughter and received three years probation. That horrible incident might have informed her choice to star in a sort-of 2009 sex tape with husband Dane and former Miss Teen USA 2002 (she lost the crown for posing nude) and reality TV brawler (she was booted off Celebrity Rehab for punching a cameraman) Kari Anne Peniche. Their sex tape was the worst kind – no actual sex and a sorta-celebrity having hit on hard times and getting recorded tits-out in a dirty bathtub. While holding a crackpipe. That’s never sexy.

Maybe this is a fresh new start for Rebs. And maybe this is an opportunity for the handsome yet somehow oily in the personality-seeming Dane to find new chicks with whom to film tragic hotel encounters.

The real question here is – why in the hell did former Miss Teen USA 2002 Kari Anne Peniche slug a cameraman when she could have punched Dr. Drew?

Tags: Eric Dane, Rebecca Gayheart
SHARE
Our commenting rules: Don't be racist or bigoted, or post comments like "Who cares?", or have multiple accounts, or repost a comment that was deleted by a mod, or post NSFW pics/videos/GIFs, or go off topic when not in an Open Post, or post paparazzi/event/red carpet pics from photo agencies due to copyright infringement issues. Also, promoting adblockers, your website, or your forum is not allowed. Breaking a rule may result in your Disqus account getting permanently or temporarily banned. New commenters must go through a period of pre-moderation. And some posts may be pre-moderated so it could take a minute for your comment to appear if it's approved. If you have a question or an issue with comments, email: [email protected]
src="https://c.statcounter.com/922697/0/f674ac4a/1/"
alt="drupal analytics" >