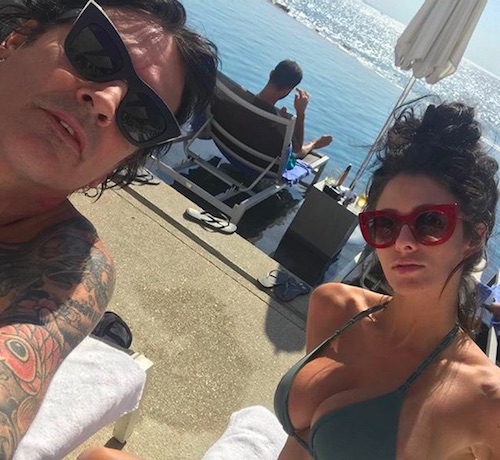 Pop a bottle of sparkling penicillin, Tommy Lee is getting married for the fourth time! Page Six says that 55-year-old On Valentine’s Day, Tommy Lee slipped a tasteful heart-shaped diamond ring onto the finger of his 31-year-old girlfriend of about eight months Brittany Furlan.

Both Tommy and Brittany showed off her new engagement ring on Instagram.

This will be Tommy’s fourth wedding (he was previously married to Elaine Starchuk, Heather Locklear, and Pamela Anderson) and his fifth engagement (he was last engaged in 2014 to Sofia Toufa). This will be Brittany’s first marriage. Brittany is a former Vine star and current…person who is on social media. She’s even roped Tommy Lee into some of her Instagram skits.

Normally I’d say that a 24 year age difference might be too big a generation gap, but this is an aging rocker we’re talking about here. No fourth wife is too young. Plus, they can always bond over the fact that they both enjoy low-budget filmmaking.

Tags: Brittany Furlan, Engagements, Tommy Lee
SHARE
Our commenting rules: Don't be racist or bigoted, or get into long-ass fights, or go way off topic when not in an Open Post. Also, promoting adblockers is not allowed. And some comment threads will be pre-moderated, so it may take a second for your comment to show up if it's approved.
src="https://c.statcounter.com/922697/0/f674ac4a/1/"
alt="drupal analytics" >