In “He Hadn’t Already?” News, Ewan McGregor Filed For Divorce 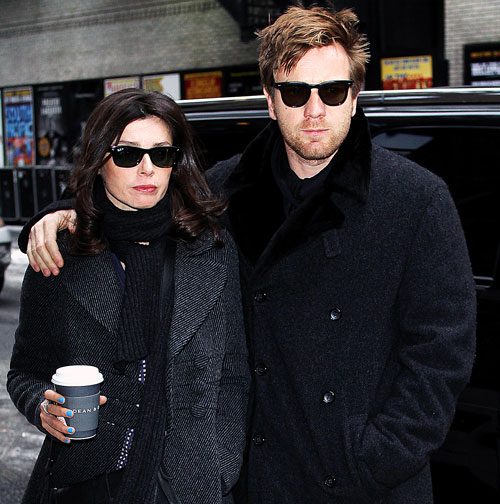 Ewan McGregor has unsurprisingly filed for divorce from his wife of 22 years, Eve Mavrakis, according to TMZ. Ewan and Eve have been publicly estranged since October, but he fast-tracked the demise of his marriage by getting papped kissing and holding hands with his Fargo co-star Mary Elizabeth Winstead. This might have irked wifey, because Ewan wants to share the kids and Eve wants to keep it at visitation (“without your whore present because I don’t want the children exposed to your sluttery!“). The filing probably doesn’t say that, but imagine if you could express yourself like that in court documents?

Ewan wants joint custody of three of the couple’s four kids – Jamyan, 16, Esther, 15, and Anouk, 6. (They also have a 21-year-old daughter named Clara.) Eve wants sole physical custody of the three kids with Ewan popping in once in a while for a visit.  Esther may side with her mom, because she recently posted a song on Instagram about how she don’t know if she’ll ever forgive her dad for the pap pictures of him kissing his rebound. via Page Six

In the Instagram clip, Esther strums her guitar and sings about “shit she found online.”

Esther adds: “Happy birthday to me, am I right?” — thought to be a reference to the Sun first publishing pictures of her dad’s kiss on Oct. 22 — her birthday.

Eve also commented on the state of her messy marriage in a response to an Instagram comment back in November.

“I can’t believe Ewan would end things with u,” the fan wrote. “U are so much better than him!!!! Take him for every penny u can!!!”

Ewan’s schtick seems to be trying to do every actress on every project he’s worked on. That hot Margo Martindale must have a story or two about Ewan. Ewan supposedly likes to get the men involved sometimes, too, so Jar Jar Binks must have some stories, too!

Tags: Eve Mavrakis, Ewan McGregor, Mary Elizabeth Winstead
SHARE
Our commenting rules: Don't be racist or bigoted, or post comments like "Who cares?", or have multiple accounts, or repost a comment that was deleted by a mod, or post NSFW pics/videos/GIFs, or go off topic when not in an Open Post, or post paparazzi/event/red carpet pics from photo agencies due to copyright infringement issues. Also, promoting adblockers, your website, or your forum is not allowed. Breaking a rule may result in your Disqus account getting permanently or temporarily banned. New commenters must go through a period of pre-moderation. And some posts may be pre-moderated so it could take a minute for your comment to appear if it's approved. If you have a question or an issue with comments, email: [email protected]
src="https://c.statcounter.com/922697/0/f674ac4a/1/"
alt="drupal analytics" >