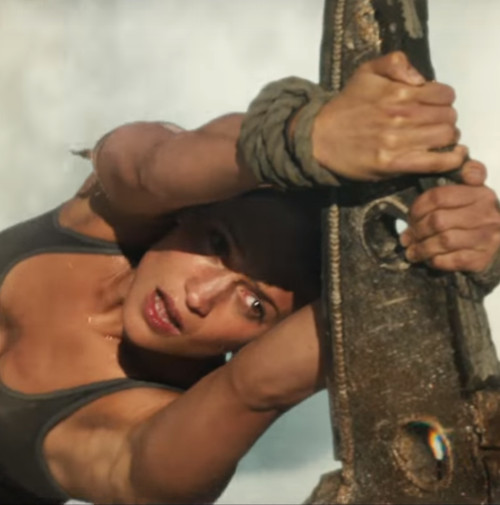 I don’t play video games so I don’t really know what Lara Croft’s deal is supposed to be. I did see the first movie with Angelina Jolie and it was fun to watch a female lead be a swashbuckling adventurer who seemed to give few if any fucks. Now I’ve just watched the newest trailer for the new reboot simply called Tomb Raider starring Alicia Vikander and I’m spitting mad for no good reason. In #thesetryingtimes, you’d think I’d have something better to get worked up about. Yet, here we are.

And here it is:

Maybe it’s  because its easier to sweat the small stuff when the big stuff is so horrifying? But I digress. This lady ain’t no badass! Sure, she can jump high and seems very good at hanging off things but maybe they should have just made Cliffhanger 2: Hanging Around instead. From the looks of this trailer, Lara is a circumstantial badass instead of an innate badass. This Lara is a doe-eyed innocent looking for her lost daddy! She spends most of her time running from things rather than running towards them. I wanted her to be an anti-hero, not an old fashioned heroine with perma “worried face“. And again, KEEP YOU MINOR KEY BEYONCE. We don’t want it!

That said, McNutty looks hotter than ever, even if he is a ghost.

Tags: Alicia Vikander, Angelina Jolie, Dominic West, Tomb Raider, Trailers
SHARE
Our commenting rules: Don't be racist or bigoted, or get into long-ass fights, or go way off topic when not in an Open Post. Also, promoting adblockers, your website, or your forum is not allowed. And some comment threads will be pre-moderated, so it may take a second for your comment to show up if it's approved.
src="https://c.statcounter.com/922697/0/f674ac4a/1/"
alt="drupal analytics" >