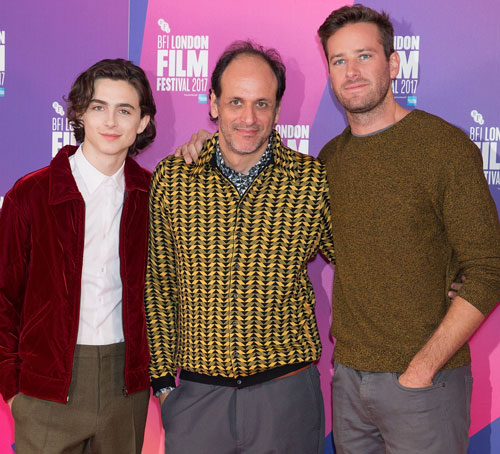 By now, everybody has probably heard about the peaches and twink cream scene in the gay love story Call Me By Your Name. But since hearing about a peach fucking scene never gets old, I’ll give you the peach cream details again. In the novel by André Aciman, Elio the American twink fucks a peach while thinking about sexing on Oliver the American graduate student. Oliver walks into Elio’s room a little later, finds the peach and eats it. Oliver is so that bitch who permanently stays next to the peaches and brie plate at a brunch party.

The peach scene made it into the movie version of Call Me By Your Name, but director Luca Guadagnino was going back and forth on whether or not they should shoot it. Luca decided to go for it after finding out first-hand (or first-peen in this case) that ass fucking the peach guts out of a peach is possible.

21-year-old Timothée Chalamet (who looks way younger than his age) plays 17-year-old Elio and 31-year-old Armie Hammer (who looks older than his age) plays 24-year-old Oliver. Luca told Out Magazine that after he found out that it’s totally possible to go all Jason Biggs in American Pie on a stone fruit (Side note: StonedFruit69 is my Grindr username), he let Timothée know that fucking a peach is possible so the scene was a go. Timothée already knew it was possible, because he tried it. Luca (seen above sandwiched between Timothée and Armie at the BFI London Film Festival today) said this to Out:

John Travolta so wishes he could use his Scientology powers to travel back in time to when Call Me By Your Name was shooting so that he could apply for the job of prop wrangler, specifically peach wrangler. It’s not known if Armie Hammer decided to join his director and co-star by also doing a peach, but if a crew member found a busted open peach covered with rope knots in a trash can, we know the answer to that.

Speaking of Armie, he continued to defend the age difference in Call Me By Your Name. The Snow Miser’s twin brother James Woods brought it up in a tweet, and so did someone on Twitter who definitely knows what the definition of a pedophile is. Armie, of course, clapped back.

You do know that you live in a state where the age of consent is 16, right….? Ok. Now shut up.

Okay, but what about the peach?! That peach better have been of age (aka more than 10 weeks old)! Tags: Armie Hammer, Peach Fucking, Timothée Chalamet
SHARE
Our commenting rules: Don't be racist or bigoted, or post comments like "Who cares?", or have multiple accounts, or repost a comment that was deleted by a mod, or post NSFW pics/videos/GIFs, or go off topic when not in an Open Post, or post paparazzi/event/red carpet pics from photo agencies due to copyright infringement issues. Also, promoting adblockers, your website, or your forum is not allowed. Breaking a rule may result in your Disqus account getting permanently or temporarily banned. New commenters must go through a period of pre-moderation. And some posts may be pre-moderated so it could take a minute for your comment to appear if it's approved. If you have a question or an issue with comments, email: [email protected]
src="https://c.statcounter.com/922697/0/f674ac4a/1/"
alt="drupal analytics" >