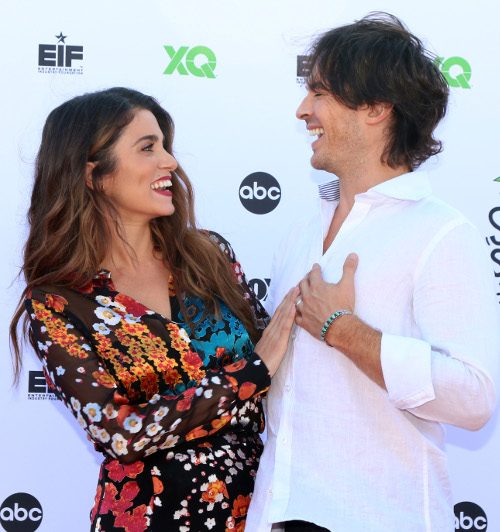 Annoying new age woo woo loving couple Nikki Reed and Ian Somerhalder like to make it seem like they are perfectly in sync with the universe and with each other. But according to UsWeekly, Nikki let it slip during an interview that Ian’s a bit of a rogue, baby thirsty, birth control snatching creeper.

Nikki and Ian were on a podcast, and laughed when she said that Ian was so ready for a baby that he trashed her birth control pills.

When Nikki Reed and Ian Somerhalder decided that they were ready to start a family, he took matters into his own hands.

“[He] threw out all my birth control pills,” the Twilight actress, 29, said with a laugh during a recent interview on Dr. Berlin’s Informed Pregnancy podcast.

Informed Pregnancy? Sounds more like coerced pregnancy! Ian must not have liked how that made him sound so he jumped in and tried to make light of the incident but just ended up coming off creepier than ever.

Likely realizing that his wife’s comments were bound to raise eyebrows, the Vampire Diaries actor, 38, explained himself. “We decided that we wanted to have children together, and it was just time. But unbeknownst to poor Nikki, she didn’t realize that I was going to go in her purse and take out her birth control. By the way, it was the beginning of the pack, so I had to pop all those suckers out.”

Ian, what is you doing? The only thing you should be poppin’ is dat ass. Your OWN ass, Ian. Ian has a history of disobeying his wife’s wishes, even the dumb ones. Remember when Nikki said she wanted to do 30 days of silence after the birth of their kid? Well, he lasted just over a week before he started in with the cat pictures on Instagram.

Ian also said that he made a hilarious video of Nikki freaking out as her birth control pills flushed down into their watery grave.

Somerhalder then revealed that he has a six-minute video of Reed “freaking out” as he flushed the pills down the toilet. “Actually, now thinking about it, I guess I kind of decided [to start a family],” he quipped.

God grant me the serenity to not chip a nail reaching through my computer screen to slap the smug look off this dude’s face.

What if we could reinvent high school? ‪I'm here now and on live now! Live east coast now! On ABC, FOX, NBC, CBS, Hulu and YouTube TUNE IN NOW!‬

Tags: Creeps, Ian Somerhalder, Nikki Reed
SHARE
Our commenting rules: Don't be racist or bigoted, or post comments like "Who cares?", or have multiple accounts, or repost a comment that was deleted by a mod, or post NSFW pics/videos/GIFs, or go off topic when not in an Open Post, or post paparazzi/event/red carpet pics from photo agencies due to copyright infringement issues. Also, promoting adblockers, your website, or your forum is not allowed. Breaking a rule may result in your Disqus account getting permanently or temporarily banned. New commenters must go through a period of pre-moderation. And some posts may be pre-moderated so it could take a minute for your comment to appear if it's approved. If you have a question or an issue with comments, email: [email protected]
src="https://c.statcounter.com/922697/0/f674ac4a/1/"
alt="drupal analytics" >