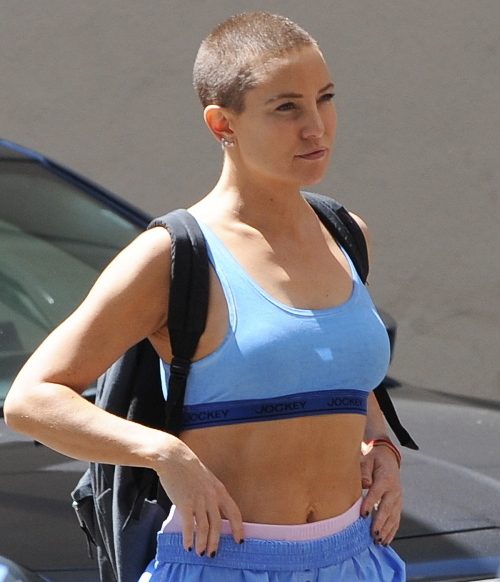 You know those inane “25 Things You Never Knew About…” questionnaires they have in the glossy mags that are super dumb but you read them while you’re pooping since it’s better than thinking about how weird pooping is? Well, Kate Hudson was recently featured in one of those for a Cosmopolitan cover story and it blew up in her face. Sandwiched between the prompts “The last photo I took on my phone” and “My me-time rituals” lay a hidden bomb. A question so probing, so searing in its search for profound truth that it gets to the core of what it means to be human: “The laziest thing I’ve ever done“. Kate’s Answer? “Have a C-section!“.

Not surprisingly, Kate’s cavalier answer ignited a #tweetnado of angry moms who took umbrage with her response. Suddenly banal, innocuous Kate Hudson has become enemy #1 of the womb cartel (bear with me, I’m catching up on S1 of Narcos). This bish better watch her back!

Dear #KateHudson
Having a C-Section is far from lazy, ok? pic.twitter.com/DcjmJbi6i0

I have a friend, let’s call her “Martha”. Her nickname is The Worst. She’s got a big mouth on her and is flagrantly tactless but also hilarious and we love her very much. Martha talks about her c-section like it was her best spa day of all time, any chance she gets. Martha will never be famous so it’s OK. We just roll our eyes and say “oh, Martha! You’re the worst!” because Martha is a regular like you and me. But Kate should have known better. Cosmo will lead you down the primrose path and then splatter you with an AK47 while your back is turned, spraying pink blood and cutesy-cursive font entrails all over the walls.

I’m sure Kate put ZERO thought into her answer but you can bet she’s going to have to come to the table and negotiate some sort of apology that proves she’s aware of the issues, and that she made a choice for herself and of course a c-section shouldn’t be taken lightly and yes the decision to have one is very difficult for some women yada, yada, yada. After which it will probably blow over and we can all go back to pooping in peace and not really thinking about Kate Hudson.

Here’s Kate’s bald head on the set of Sisters which is being directed by Sia! Tags: Dumb Question, Hail Caesar, Kate Hudson
SHARE
Our commenting rules: Don't be racist or bigoted, or post comments like "Who cares?", or have multiple accounts, or repost a comment that was deleted by a mod, or post NSFW pics/videos/GIFs, or go off topic when not in an Open Post, or post paparazzi/event/red carpet pics from photo agencies due to copyright infringement issues. Also, promoting adblockers, your website, or your forum is not allowed. Breaking a rule may result in your Disqus account getting permanently or temporarily banned. New commenters must go through a period of pre-moderation. And some posts may be pre-moderated so it could take a minute for your comment to appear if it's approved. If you have a question or an issue with comments, email: [email protected]
src="https://c.statcounter.com/922697/0/f674ac4a/1/"
alt="drupal analytics" >