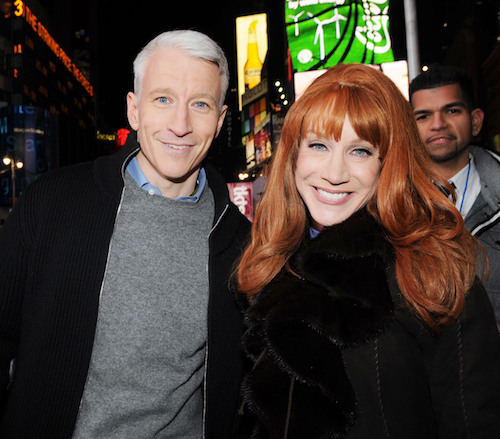 I was watching Anderson Cooper interview Bernie Sanders the other night, and I was all, “Praise the LAWD we can vote that orangutan out of the White House next year.” Unfortunately, I was reminded that it has only been eight months of the Trump presidency, and I immediately tried to see if I could find someone to drive me to Taco Bell and not judge while I stress ate a gordita. UGH. It’s been a total shit storm of an eight months, and one of the casualties in the wake of Prez Cheeto (along with what was left of our national dignity) is Kathy Griffin. As you may recall, she did a photo shoot with a bloody mask that looked like she was holding up his severed head, and, well, that didn’t exactly play well.

For the record, I am appalled by the photo shoot Kathy Griffin took part in. It is clearly disgusting and completely inappropriate.

Kathy responded in a press conference that she felt hurt by his Dad admonishing, but has mainly been quiet ever since, apart from confirming the Secret Service had dropped by to interrogate her. Anderson’s BFF Andy Cohen had him on Watch What Happens Live last night and asked him if the two were still friends, and E! says AC360 replied, “Yeah, we’re still friends. Look, I said what I said about…I didn’t think what she said was appropriate.” It’s all in the video below:

Call me nuts, but that doesn’t look like Anderson is having Kathy and Maggie Griffin over for a box of Franzia in Montauk anytime soon. “I wish her the best,” is Hollywood speak for “Fuck off, you’re ruining my brand,” and nobody knows brands better than someone who is one breath away in either direction from the Real Housewives AND Gloria Vanderbilt for Wal-Mart empires! Anderson, I’m onto you like a hobo on a Trader Joe’s bologna sandwich, so don’t even try to claim like you’re still caressing your friendship charm bracelet you and Kathy made out of Don Lemon’s NYE 2017 bar receipts! Until I see Kathy at the book party for Gloria’s next erotic novel, I say false to this story!

Tags: Anderson Cooper, Andy Cohen, Kathy Griffin
SHARE
Our commenting rules: Don't be racist or bigoted, or get into long-ass fights, or go way off topic when not in an Open Post. Also, promoting adblockers is not allowed. And some comment threads will be pre-moderated, so it may take a second for your comment to show up if it's approved.
src="https://c.statcounter.com/922697/0/f674ac4a/1/"
alt="drupal analytics" >