Mariah Carey And Nick Cannon Might Get Back Together 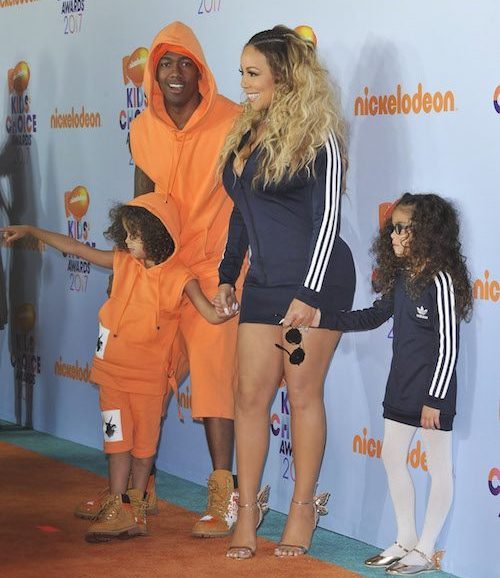 Pink cloud dreamer Mariah Carey and her ex-husband, “dolorous” clown Nick Cannon, have been spending a ton of time together lately. They claim they’re just co-parenting the right way. “The right way” meaning, getting along for the sake of your kids and not dropping them off at the foot of the driveway due to the restraining order and wearing homemade “You’re A Terrible Parent” t-shirts.

But People feels differently. They’ve got a source who gave them information in the manner known as “exclusively,” so it must be true.

After nearly two years of being separated, “there seems to be hope that they will get back together permanently.”

Desk job-phobic Mimi and crazy-not-crazy Nick recently celebrated their twins’ sixth birthdays with a family day at Disneyland. Moroccan and Monroe probably got a platinum celebrity fast-pass where you can get on the rides before everyone else, and it affords you a number of snooty laughs at the peasants in line, even the people in wheelchairs. Celebrities are the worst. It’s activities like these that are giving some hope that they’ll become a couple once more.

“Mariah and Nick are getting along great. Nick spends most of his time with Mariah and the kids. Mariah is great with Nick around. There seems to be hope that they will get back together permanently.”

However, Nick and other sources say that we shouldn’t expect him to be helping Mariah with her intimate Spanx regimen anytime soon.

“It’s so perfect right now honestly, I’m working on being the best me that I can possibly be and from that I’m working on being the best father that I can be and that’s a plate full right there. I love her, I adore her, that’s always going to be my dream girl but I think as mature adults I think we just operate better with the way things are right now.”

How much spousal support money from Mimi went into getting him to drop “dream girl” into there? But anyway, unreality dweller Mimi agrees that they’re just co-parenting right now and everyone should save their rice.

It’s probably better for Nick Cannon that they don’t get back together. Didn’t he cover up his “Mariah” back tattoo with an enormous crucifix when they split? If they tried to make it happen again, she’s probably going to want him to turn Jesus back into Mariah (it’s like water into wine but sparklier). That’s a lot of tattooing over tattooing in the same place, which is a lot of pain. He’d be verging into the guy from S-Town territory, and no one wants that sort of queasy nightmare on their back.

Tags: Mariah Carey, Nick Cannon
SHARE
Our commenting rules: Don't be racist or bigoted, or post comments like "Who cares?", or have multiple accounts, or repost a comment that was deleted by a mod, or post NSFW pics/videos/GIFs, or go off topic when not in an Open Post, or post paparazzi/event/red carpet pics from photo agencies due to copyright infringement issues. Also, promoting adblockers, your website, or your forum is not allowed. Breaking a rule may result in your Disqus account getting permanently or temporarily banned. New commenters must go through a period of pre-moderation. And some posts may be pre-moderated so it could take a minute for your comment to appear if it's approved. If you have a question or an issue with comments, email: [email protected]
src="https://c.statcounter.com/922697/0/f674ac4a/1/"
alt="drupal analytics" >