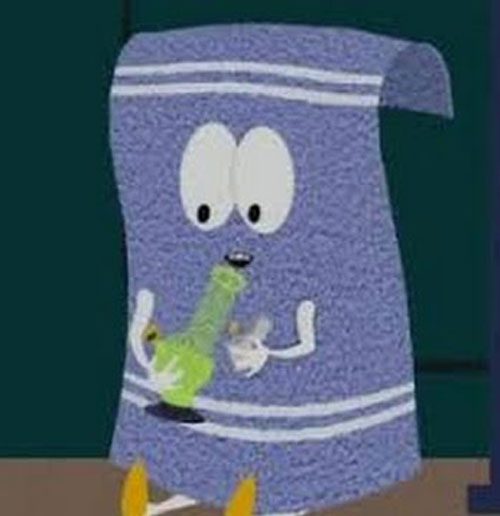 Towelie, stoner icon and the worst of the worst South Park characters!

Some of you probably woke up in the middle of the night, stumbled into your kitchen and smoked the blunt and gobbled down the cold pizza and Doritos sandwich you left out for Santa Bong (aka Willie Nelson), and that could mean only one thing: it’s 4/20 today! It’s the holiday that used to be a little stoner holiday until those whore leech demons in corporate America came along and sucked all the fun out of it like they do with everything. I mean, Denny’s, who has been known to drug test (yes, I’m using Yahoo! Answers as proof like a real journalist), is trying to butter up stoners on Twitter by telling 4/20 jokes. Stupid hypocrite skanks!  I’ll make sure to tell the manager at my nearest Denny’s that after my stoned ass takes a Lyft there to celebrate 4/20 with a sticky bun pancake breakfast.

In honor of this sacred holiday, let’s pay tribute to South Park’s super stereotypical stoner and druggie character who just so happens to be a damn towel. Trey Parker and Matt Stone should tell the world the recipe for the hallucinogenic cocktail they were on when they thought of Towelie, because I’m sure many people want to be that kind of high. “Creating a bong-smoking towel in your mind” is the pinnacle of high. Towelie made his debut in the season 5 episode named after him. He’s a genetically engineered talking towel who was made to get people as dry as possible, but he really just wants to get as high as possible. Towelie wasn’t just a stoner, he was sadly, a crackhead too.

Towelie was in a handful of episodes and he eventually went to rehab and got sober for the sake of his wife and child, Washcloth. And of course, some kind soul made a supercut of Towelie’s greatest hits:

Happy 4/20, everyone! May you stoners get as high as Towelie used to get!