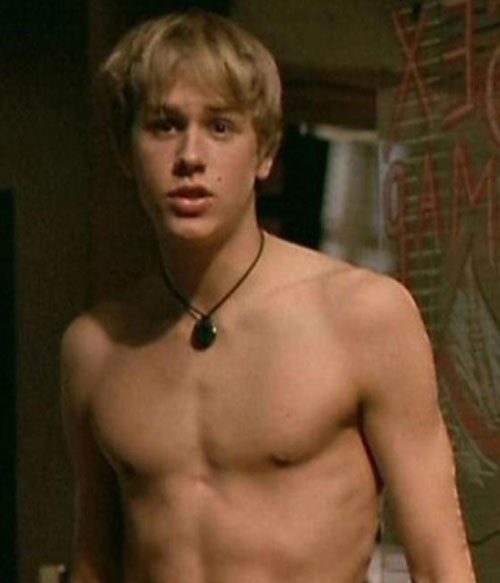 Long before Charlie Hunnam was a muscled-up method thespian, he was a barely legal twink (see: above in a still from Queer As Folk) who got quickie married to a chick he only knew for a few weeks. When Charlie Hunnam was around 18, he went to an audition for Dawson’s Creek and that’s where he met Katharine Towne, who’s two years older than him. Three weeks after Charlie and the star of The In Crowd (or Sunday if you watched Buffy) got together, they went off to Vegas and became husband and wife. Charlie says that they were in love, but this reads like either a green card situation or a major dickmatization/coochmatization situation.

Charlie told the story to AP at CinemaCon last month and said that the marriage lasted for three horrible years. Charlie’s first marriage ended with him losing a lot of money but gaining some pussy.

“I’d known the girl for three weeks and we’d fallen madly in love. It was the first time I’d ever been in love and I thought, ‘I have to leave to go back to England.’ We met at a Dawson’s Creek audition, just as a side note for whoever might be interested in the full story.

We fell in love and then we came to Vegas because in our 18-year-old minds, we thought, ‘What if we never see each other again? Let’s get married, and then we’ll have to see each other again, even if it’s just to get divorced.’ And so we came to Vegas, but I couldn’t even get a drink, so I didn’t think I was actually going to be able to get married. I thought it was just a lark, but we sort of psyched ourselves into it and then at 2 o’clock in the morning we ended up getting married. It was at the Silver Bell Wedding Chapel. I even remember it was Reverand R.J. Cotton. We wanted to get married by [Elvis] but he had left the building.

[It was] three terrible, painful, expensive years, but I got the cats at the end of it. There was a small victory.”

Charlie said a while ago that he and Katharine were awful at being married to each other, but they’re friends now.

The most unbelievable part of Charlie’s story is that his marriage lasted three years. That’s even a long time for Hollywood types who are grown. I’ve done the math and I don’t get three years:

And in case you don’t know what Katharine Towne looks like, here’s some old pictures of her: Tags: Charlie Hunnam
SHARE
Our commenting rules: Don't be racist or bigoted, or get into long-ass fights, or go way off topic when not in an Open Post. Also, promoting adblockers is not allowed. And some comment threads will be pre-moderated, so it may take a second for your comment to show up if it's approved.
src="https://c.statcounter.com/922697/0/f674ac4a/1/"
alt="drupal analytics" >