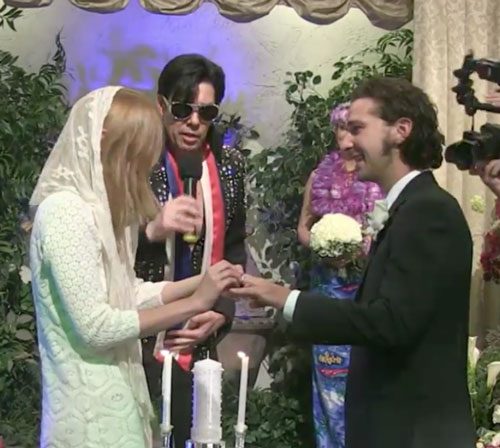 Las Vegas has long been known as the HIGH ART capital of the world, so it’s not a surprise that Summer’s Eve’s favorite artist Shia LaBeouf (sorry, James Franco) would choose it as the place to perform his latest art piece that I’d like to call “This Is Not Going To End Well.” Shia and his on-and-off-again brow-less piece Mia Goth got married by an Elvis impersonator in a ceremony that was livestreamed on TMZ. If Pimp Mama Kris had a heart, it would break by the heavy weight of betrayal from Harvey Levin letting someone other than a Kartrashian be the first fame whore to get married live on TMZ.

Shia and Mia (couple name: ia²) have been a thing since 2012, but they broke up for a minute last year after getting into a messy, messy fight in Germany. Shia told some guys who gave him a ride to the airport that he would’ve killed her if locals didn’t break up their fight. And now they may be husband and wife! After being engaged for a few months, Shia and Mia went to the Viva Las Vegas chapel today to make it legal and they let TMZ livestream all of it. I’ve never heard Mia Goth talk before so her “baby Georgia Engel on dental anesthesia” voice threw me for a second.

Because of those overgrown pube strips on Shia’s face, he looks like a 70s serial killer and Mia looks like the hitchhiker he picked up.

If this isn’t another performance fart piece that Shia pulled out of his ass and they really got married, I have two very important questions: 1. Is Mia registered for brow weaves at Sally Beauty Supply? 2. Why wasn’t Shia’s ratty fake rattail his best man? Or even the ring bearer! That flea-ridden polyester rattail is probably lying on a garbage pile somewhere and is shedding a tear over how Shia discarded it like it was, well, like it was a flea-ridden polyester rattail.

Tags: High Art, Mia Goth, Shia LaDOUCHE, This Is Not Going To End Well, Weddings
SHARE
Our commenting rules: Don't be racist or bigoted, or post comments like "Who cares?", or have multiple accounts, or repost a comment that was deleted by a mod, or post NSFW pics/videos/GIFs, or go off topic when not in an Open Post, or post paparazzi/event/red carpet pics from photo agencies due to copyright infringement issues. Also, promoting adblockers, your website, or your forum is not allowed. Breaking a rule may result in your Disqus account getting permanently or temporarily banned. New commenters must go through a period of pre-moderation. And some posts may be pre-moderated so it could take a minute for your comment to appear if it's approved. If you have a question or an issue with comments, email: [email protected]
src="https://c.statcounter.com/922697/0/f674ac4a/1/"
alt="drupal analytics" >