Page Six Says That St. Angie Jolie Dumped Brad Pitt After Finding Out He Passed His Peen To Marion Cotillard When the trailer for Mr. & Mrs. Smith Go To World War II Times (aka Allied) came out, everybody, including this bitch, joked that it’s really not a Mr. & Mrs. Smith reboot until Brad Pitt leaves St. Angie Jolie for Marion Cotillard and Angie goes on to spend her nights drying her lonely tears on her boyfriend pillow while listening to Adele. Page Six claims that those jokes are fact and that St. Angie dumped Brad after finding out that he broke their vows on Marion’s coochie a la Française.

When TMZ first broke the news that probably caused an earthquake in Los Angeles, they said that St. Angie filed for divorce because she doesn’t like the way always-stoned Brad parents Captain Maddox and the rest of the child army, and believes he may be a danger to them. But a source tells Page Six that St. Angie really dumped Brad because he’s in a Current Day Ben Affleck Phase. The source claims that Angie hired a private investigator to follow Brad as he shot Allied in London and she discovered that when he wasn’t fucking on Marion, he was partying with Russian whores and getting into the bad shit.

“She hired a private eye because she felt that he was fooling around with her on the set, and it turns out, he was. And that was the final straw. The atmosphere [off-set] was full of hard drugs and Russian hookers, and Angie was told Brad got caught up in it. He’s in the throes of some insane midlife crisis, and Angie is fed up. The older she gets, the more serious she becomes, and she is sick of the Hollywood thing. He wants to make movies. She doesn’t. It’s a fundamental difference. It’s how you live your life.”

Marion has been with Guillaume Canet, who’s the father of her 5-year-old son, since 2007 and as far as anyone knows, they’re still together.

Page Six’s source also spit out a heavy dose of WTF when they said that Brad has been hanging around St. Angie’s dad Jon Voight a lot, because he’s into Hollywood. The source claims that Brad hangs out with Jon more than Angie does. That’s not exactly a surprise since Angie and Jon have been on the outs off-and-on for years and years. Jon talked to Radar after the news of Brangelina breaking up came out, and he said he found out when everyone else did:

“I don’t know much about it except it must be something serious. I just got the news and I’m concerned. The priority is always the children. I know she’s always concerned about the children.”

TMZ spit back at Page Six and they say that Marion’s chocha had nothing to do end with the end of Brangelina. TMZ’s source repeated that it’s all about the child army. St. Angie’s entertainment lawyer, Robert Offer, seemed to confirm that in this statement to Reuters:

“This decision was made for the health of the family. She will not be commenting, and asks that the family be given its privacy at this time.”

Brad also released his own statement to People:

“I am very saddened by this, but what matters most now is the well-being of our kids. I kindly ask the press to give them the space they deserve during this challenging time.”

The tabloids come out tomorrow, so every editor is probably screaming “STOP THE PRESSES! STOP THE PRESSES!” while wondering which angle to go with on their cover. Do they go with the “Brad Pitt’s parenting is very uncool” angle or do they go with the “Marion Cotillard is the new Angelina Jolie” angle? Or do they just go full fanfic and say that Jennifer Aniston has dumped Justin Theroux to get back with Brad or…PLOT TWIST (get with Angie)?

Here’s Marion leaving a TV station in Paris a couple of days ago, and no, I don’t know why she’s got a Taylor Swift emoji on the back of her jacket: 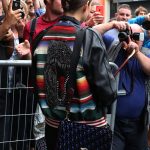 Tags: Angelina Jolie, Brad Pitt, Brangelina, Marion Cotillard, NSFW
SHARE
Our commenting rules: Don't be racist or bigoted, or get into long-ass fights, or go way off topic when not in an Open Post. Also, promoting adblockers is not allowed. And some comment threads will be pre-moderated, so it may take a second for your comment to show up if it's approved.
src="https://c.statcounter.com/922697/0/f674ac4a/1/"
alt="drupal analytics" >