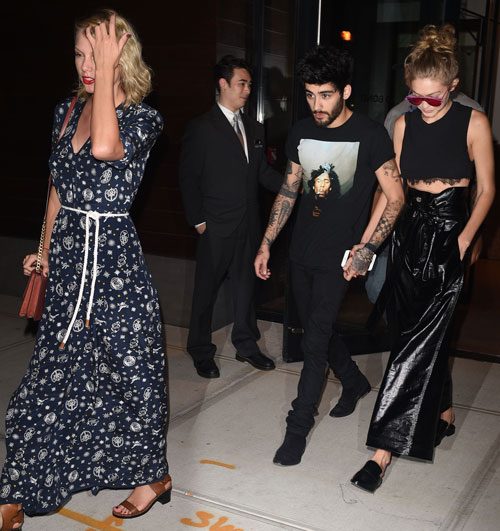 I should slap myself with a bottle of cucumber melon lotion (which you know is Taylor Swift’s favorite scent because it would be) for writing that headline. Taylor Swift is nobody’s third wheel! Taylor Swift is a superstar unicycle and that Dollar Tree Helena Christensen named Gigi Hadid and Zayn Malik are her second and third wheels!

Karlie Kloss’ position as the highest ranking model friend in Tay Tay’s squad must have dropped and Gigi Hadid must have replaced her. Because Taylor went to the show for Gigi’s collection for Tommy Hillfiger over the weekend, and last night the two had dinner with Zayn. And the “Rhoda going boating” mess of a dress that Taylor is wearing is from Gigi’s collection. So Taylor must really want to show us how good she is at friendship-ing if she wore that ugly shit out in public.

The next time Taylor does a photo-op pap strut with Gigi, the two should probably coordinate looks. Because while Gigi looks like a sad goth in body bag pants, Taylor looks like a high school English teacher who does astrology charts for her students after class. Taylor also looks like a mom chaperoning her daughter and her daughter’s boyfriend on a date. And Gigi and Zayn look like the daughter and daughter’s boyfriend who just did drugs in the bathroom and are trying hard to look sober in front of Mrs. Swift. 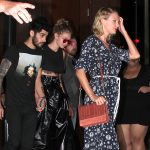 Tags: Gigi Hadid, Open Post, Zayn Malik
SHARE
Our commenting rules: Don't be racist or bigoted, or get into long-ass fights, or go way off topic when not in an Open Post. Also, promoting adblockers is not allowed. And some comment threads will be pre-moderated, so it may take a second for your comment to show up if it's approved.
src="https://c.statcounter.com/922697/0/f674ac4a/1/"
alt="drupal analytics" >