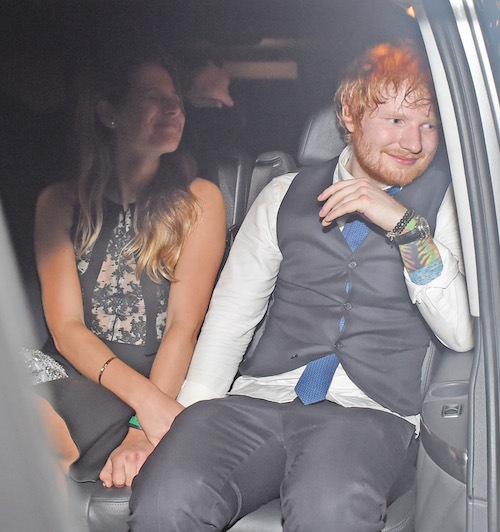 Despite being longtime BFFs with one of the biggest relationship stunt queens in the game, Ed Sheeran keeps it a little quieter when it comes to where his ginger business has been. He never confirmed if he was ever actually doing it with a Pussycat Doll last year. He’s rarely papped with his current girlfriend Cherry Seaborn, seen above leaving a premiere with him in London last October.

So really, I guess no one should be surprised if Ed were to go and get secret married. According to The Sun, Ed might have done just that. Two days ago, a picture of Ed attending a friend’s daughter’s 5th birthday party hit the internet in which he just so happened to be showing off a ring on that finger.

Judging by the distracted look on her face, either the photographer didn’t yell “1-2-cheese” before taking that picture, or that little girl just realized that that ring was about to steal all her 5th birthday thunder. I choose to believe it was the second, because 5-year-olds are wise like that.

Ed and Cherry have been dating for a year, so it’s not crazy to think that they might have recently made it legal. Ed himself hasn’t confirmed whether he made Cherry his wife because he’s on a self-imposed social media hiatus since December.

I know a ring on that finger on that hand usually means there’s a 99.9% a person is hitched, but I’m still skeptical that he actually got married. After all, it’s a well-known fact that Taylor Swift is unable to go to a wedding and not make it AAT (All About Taylor). I mean, she made damn sure she was the star of their 1st anniversary. If the Archie to Taylor’s Betty got married, we’d have heard about it. There’s no way Ed Sheeran would have had a wedding without a professional photographer getting at least six dozen pictures of Taylor catching the bouquet (just like she practiced) while her date Tom Hiddleston smiles on the outside/screams internally from the sidelines in an I Heart TS-printed tuxedo.

Tags: Ed Sheeran, Secret Married
SHARE
Our commenting rules: Don't be racist or bigoted, or get into long-ass fights, or go way off topic when not in an Open Post. Also, promoting adblockers, your website, or your forum is not allowed. And some comment threads will be pre-moderated, so it may take a second for your comment to show up if it's approved.
src="https://c.statcounter.com/922697/0/f674ac4a/1/"
alt="drupal analytics" >