“Hmmm….something in the milk is POISON!” – that dog, who obviously knows what’s up and knows that Prince George cannot be trusted!

The heir to the British throne turns 3 years old today, and so Kensington Palace celebrated by gifting the eyes of his loyal subjects with cute pictures they tweeted. But well, behind one of those pictures is darkness and cruelty. Some look at the picture of Prince George and Lupo Middleton Mountbatten-Windsor above and say to themselves, “Awww, look at the widdle prince giving a widdle ice cweam to the widdle doggy.” But others look at that picture and see attempted pooch murder!

The Guardian says that that a few messes on Twitter are jokingly (I hope) calling for Prince George to be imprisoned for animal cruelty. Prince George is supposedly offering his doggy-in-waiting a taste of a white chocolate ice cream bar. Chocolate is to dogs what an Iggy Azalea song is to ears. It’s painful poison. Some dogs are also hit with a case of dogarrhea when they eat diary. That picture is so serious that the Royal Society for the Prevention of Cruelty to Animals released this statement about it:

“It is lovely that Prince George is trying to help keep his family dog, Lupo, cool in these high temperatures. We would advise people to be cautious when giving their dogs food meant for human consumption as some items, like chocolate, can be highly toxic to dogs and dairy items can be difficult for them to digest.

Instead of ice-cream we would suggest making an ice lolly from pet-friendly ingredients. Making these can be really fun for children and the end product is both safe and enjoyable for dogs.”

Prince George has yet to respond to this himself because he’s only 3 and doesn’t understand all those words. Or because he’s busy instructing his staff to set up a white chocolate ice cream stand in a dog park. Yeah, that’s probably it.

And here’s more pictures of the miniature Christopher Robin busting out J. Crew Kids catalog poses while wearing “bargain birthday outfits” (FYI: People considers a $36 toddler t-shirt a bargain.) in his birthday pictures, as well as pictures from earlier this month of Prince George waving at his haters before taking his flying royal chariot up in the air to survey his land. 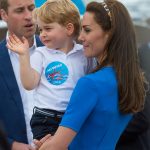 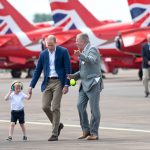 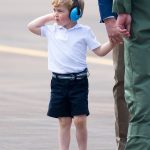 Tags: Duchess Kate, Girlfriend Please, OUTRAGE!!!!, Prince George, Prince William
SHARE
Our commenting rules: Don't be racist or bigoted, or get into long-ass fights, or go way off topic when not in an Open Post. Also, promoting adblockers, your website, or your forum is not allowed. And some comment threads will be pre-moderated, so it may take a second for your comment to show up if it's approved.
src="https://c.statcounter.com/922697/0/f674ac4a/1/"
alt="drupal analytics" >