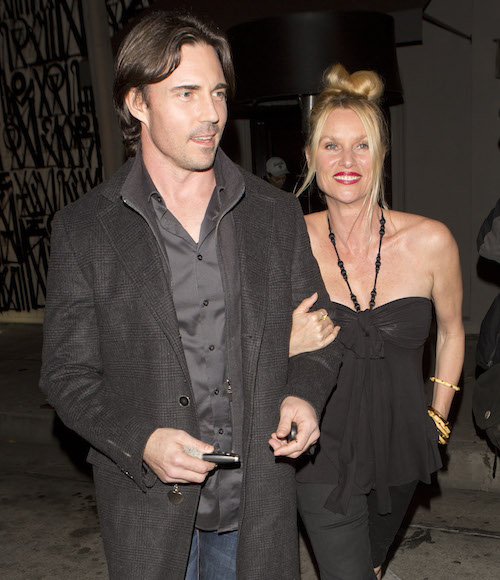 It’s 2016, so the paps aren’t exactly camped out at Nicollette Sheridan’s front door. That’s truly shameful, since the current Queen of Hallmark movies deserves nothing less than round-the-clock attention. Nicollette leads a pretty private life. So private in fact that when she got married six months ago, nobody noticed. Again, shameful; the marriage of the star of A Christmas Spirit should be important.

The point is, Nicollette was married, but she doesn’t want to be married anymore. According to People, Nicollette filed for divorce from her husband of six months, Aaron Phypers, last week. Nicollette lists the date of separation as June 19, and blames “irreconcilable differences.” She has also asked the divorce court to reject Aaron’s request for spousal support in the event he ends up doing that.

Nicollette and Aaron started dating in December 2014 and got secret married a year later. This is Nicollette’s second divorce and Aaron’s…I’m not sure. That’s literally all that is known about the situation. Aaron Phypers is a mystery; according to his Twitter account, which only has three tweets and hasn’t been active in five years, he’s from Toronto. He’s also an aspiring actor who auditioned for 2011’s Conan the Barbarian. Forget Conan; Aaron should really send this tape to Mitch Hurwitz. If Arrested Development ever gets a fifth season, Aaron would be perfect to play Steve Holt’s buff older brother.

Aaron is hot in an HGTV way (I’m not the only one who sees a No Name Scott McGillivray, right?), he’s not a thirsty fame whore, he gives it 110% in auditions, and he shows up looking cute on the red carpet. Sorry, but what irreconcilable differences?

Here’s Nicollette, Aaron and her giant wedding ring at a Hallmark Channel event in January. Tags: Another One Bites The Dust, Divorce, Nicollette Sheridan, Secret Married
SHARE
Our commenting rules: Don't be racist or bigoted, or get into long-ass fights, or go way off topic when not in an Open Post. Also, promoting adblockers, your website, or your forum is not allowed. And some comment threads will be pre-moderated, so it may take a second for your comment to show up if it's approved.
src="https://c.statcounter.com/922697/0/f674ac4a/1/"
alt="drupal analytics" >