When part-time singer/full-time social media mess Demi Lovato returned to Twitter on Tuesday after a 24-hour hiatus from “sayin shit” and “the haters“, she promised that she was coming back “more honest than ever.” In Demi Speak, that usually means she’s going to start ranting so loud, even the Ghost of Coked-Up Demi Past would be like “Girl, stop, you’re giving me a headache.” And last night she delivered on that promise.

I’m not exactly sure what set Demi off this time, but the subject of Demi’s latest Twitter rant was people who follow the lives of famous people. Demi came for the kind of people who give her attention on a platform that keeps her relevant. I hope the irony wasn’t lost on her. Demi went in on society’s obsession with celebrity culture harder than an edgy 16-year-old at Thanksgiving dinner who just recently discovered Rage Against the Machine and Adbusters.

The world is weird

Is it our fault though? Has society fed into it or is this just easy business with everyone from blogs to magazines trying to cash in?

Who’s fault is it that teens can name more celebrity feuds than wars?

That last one though. Um, Demi? You have 36.7 million followers (a whole bunch of which are teens), and are responsible for 89% of celebrity feuds. So maybe, I don’t know, something something…glass houses.

There’s so much nonsense in those tweets. Can I name someone on the FBI’s top 10 most wanted list? What kind of question is that? Nobody can! Even America’s Most Wanted host John Walsh would be like “Hold on, let me get out my notes.” Besides, knowing Bieber’s exes and the names of people on a watch list are two very different things. That’s like going into Taco Bell and demanding to speak to the manager about why there isn’t an organic kale salad on the menu. Sometimes you just want the cheesy farty sadness pile. And yes, in this example, Bieber’s life is the farty sadness pile.

However, I do take offense at Demi’s comment about blogs being an easy business. I’ll have her know that celebrity gossip blogging is serious business. For example, I go through almost half a bottle of Advil every time I have to report on a certain former Disney child’s headache-making Twitter rants.

Here’s Demi earlier this morning performing with come to life King of the Hill character Brad Paisley on GMA. 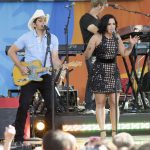 Tags: Demi Lovato, MESS
SHARE
Our commenting rules: Don't be racist or bigoted, or post comments like "Who cares?", or have multiple accounts, or repost a comment that was deleted by a mod, or post NSFW pics/videos/GIFs, or go off topic when not in an Open Post, or post paparazzi/event/red carpet pics from photo agencies due to copyright infringement issues. Also, promoting adblockers, your website, or your forum is not allowed. Breaking a rule may result in your Disqus account getting permanently or temporarily banned. New commenters must go through a period of pre-moderation. And some posts may be pre-moderated so it could take a minute for your comment to appear if it's approved. If you have a question or an issue with comments, email: [email protected]
src="https://c.statcounter.com/922697/0/f674ac4a/1/"
alt="drupal analytics" >