Kate Mulgrew Says She Was Born With Teeth, Lived In A Cage Till She Was 4 During an interview with ITV’s Lorraine (via UsWeekly), Kate talked about her memoirs that were released last year called Born With Teeth. That title is no metaphor. Kate admitted that when she popped out of her mom, she was born with a mouthful of teeth. I always thought a newborn’s surprise special features and no-cost upgrades were limited to a few extra toes or a full head of hair, but no. Apparently infants can be born with a condition called “neonatal teeth.” Kate says she was one of those babies.

Kate describes hers as being very small (naturally), blue, and “pearlescent.” But it’s dangerous for babies to have tiny baby teeth in their tiny baby mouths; neonatal teeth aren’t sturdy and can end up being swallowed. So Kate’s were removed. I wonder how much ultra-rare blue baby teeth go for on the Tooth Fairy blackmarket? Probably a lot.

Being born with teeth wasn’t the only problem little Kate had to deal with. She says she was born without any sense of pain, the technical term for which I just learned is congenital analgesia. That sounds like a fancy butt-numbing cream, but it’s actually a major problem when you’re trying to teach a curious kid not to touch the stove or reach for a knife blade-first. To prevent any unfortunate situations, Kate’s parents’ solution was to build her a little cage. Kate claims she was in the cage until she was four years old, which is when she finally developed a sense of pain. She doesn’t say how that happened, but I’m guessing it probably had something to do with getting a charlie horse from being stuck in a damn cage all day.

Hearing about infant tooth removal and crate training a human baby might make some of you want to pick up the phone and call CPS on Kate’s parents on her behalf. But you don’t need to do that, because Kate thinks it’s funny.

“So I was born with teeth and had no sense of pain. Shakespeare would have had a field day. It’s a witch! That’s what a witch is.”

A witch? Maybe to Shakespeare. I hear the words “blue teeth” and “no sense of pain” and think meth-up Smurf. Here’s more of Kate and her adult teeth along with some of the cast of Orange is the New Black at the European premiere earlier this week. 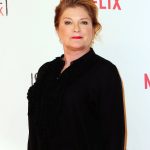 Tags: I Don't Even Know, Won't Somebody Please Think Of The Children
SHARE
Our commenting rules: Don't be racist or bigoted, or post comments like "Who cares?", or have multiple accounts, or repost a comment that was deleted by a mod, or post NSFW pics/videos/GIFs, or go off topic when not in an Open Post, or post paparazzi/event/red carpet pics from photo agencies due to copyright infringement issues. Also, promoting adblockers, your website, or your forum is not allowed. Breaking a rule may result in your Disqus account getting permanently or temporarily banned. New commenters must go through a period of pre-moderation. And some posts may be pre-moderated so it could take a minute for your comment to appear if it's approved. If you have a question or an issue with comments, email: [email protected]
src="https://c.statcounter.com/922697/0/f674ac4a/1/"
alt="drupal analytics" >