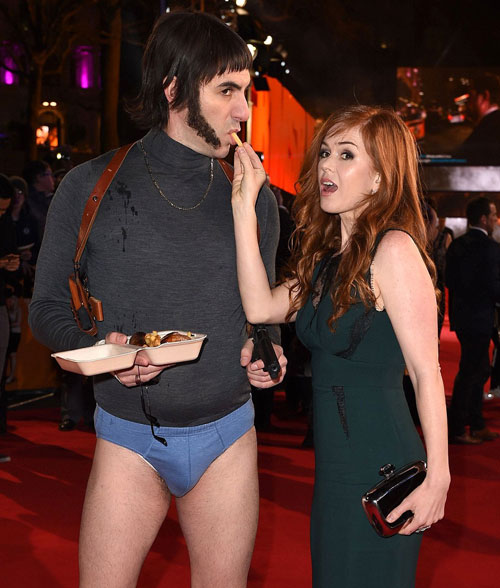 Sacha Baron Cohen has a new movie to sell and that means we all better prepare our loins and retinas for the sight of him serving up his nalgas while dressed in character at movie premieres from London to Liechtenstein. Case in hairy point: At the London premiere of Grimsby, SBC made all of us pull imaginary dick hairs out of ours mouths when he hit the camera with views of his crotch beard, furry ass cheeks and faux pubic mutton chops.

If I didn’t already know what Grimsby is about, I’d look at these pictures of Sacha Baron Cohen in character and think it was about the lost Gallagher brother who moved to the East Coast of the US to fulfill his dream of becoming a mobster’s right hand man, but after that didn’t happen, he moved to Florida and got a job as a swap meet security guard. That hot outfit screams “something you’d see on a shopper at a Walmart in Daytona Beach at 3 in the morning.” The only thing that outfit is missing is a pee stain, but then again, maybe his overgrown crotch shrub absorbed all the bladder juices.

And with all that being said, yes, yes, I’d hit it until his crotch rug gave my ass carpet burns and even then, I’d smear some aloe vera on my cheeks and keep going. Tags: Isla Fisher, Mark Strong, Open Post, Sacha Baron Cohen
SHARE
Our commenting rules are pretty simple: Don't be racist or bigoted, or go way off topic when not in an Open Post. If you see an offensive or spammy comment you think should be deleted, flag it for the mods and they'll be forever grateful and give you their first born (although, you probably don't want that).
src="https://c.statcounter.com/922697/0/f674ac4a/1/"
alt="drupal analytics" >