If someone asked me how Blake Lively and Ryan Reynolds came together, I’d smear some mayo on a piece of white bread and ask “This? Is it this?“, because I know how a mayonnaise sandwich gets made, and Blake and Ryan are pretty much the human equivalent. But according to Ryan, they got together during a double date they were on with other people.

Ryan recently admitted to Sirius XM’s Entertainment Weekly Radio (via People) that while he and Blake became “buddies” during the filming of Green Lantern, and so like lots of friends do, they decided to go on a double date together. Sadly, there might still be a TGIFridays with two people awkwardly picking at a plate of nachos and making small talk about how long their dates have been in the bathroom, because that was the night Blake and Ryan became Blake + Ryan. Unless you want to hear Ryan talk about the baby he made with Blake, skip to 2:42.

Ryan claims he didn’t get the warm feels for Blake until a year after Green Lantern. And I totally believe that, because nothing kills your boner quicker than showing up to set and remembering that your name and IMDB page will forever be linked to a stinky turd like Green Lantern. Blake Lively could have waited for him in his trailer at the end of the day wearing only a Green Lantern ring she swiped from the prop department, and he would be like “I…no. I can’t. I’m just too bummed out.”

And because we didn’t get a good enough look at them the first time, here’s Blake working a pair of Bedazzled bike shorts at the amfAR Gala last night. Huh, I didn’t realize bike shorts came with the 1989 Republican Senator & Senator’s Second Wife fashion set. 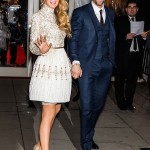 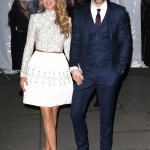 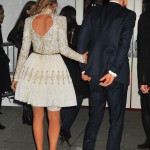 Tags: Blake Lively, Boring Couples, I Guess That's Cute, Ryan Reynolds
SHARE
Our commenting rules are pretty simple: Don't be racist or bigoted, or go way off topic when not in an Open Post. If you see an offensive or spammy comment you think should be deleted, flag it for the mods and they'll be forever grateful and give you their first born (although, you probably don't want that).
src="https://c.statcounter.com/922697/0/f674ac4a/1/"
alt="drupal analytics" >