Well, that’s one way to clap back at a person who has been dragging you on Twitter. TMZ says that Ciara (real name: Ciara Princess Harris) has gone ahead and filed a $15 million lawsuit against her former fiance/current baby daddy Future (real name: Nayvadius DeMun Wilburn) for slander after he accused her of being a shit mother to their 1-year-old son Future Zahir. Somewhere in a pile of socks and burger wrappers, Blac Chyna sat up and thought “Hmmm…that’s a pretty good idea.”

It all started back in July after Future saw a picture of Ciara’s celibate boyfriend Russell Wilson pushing Future Jr. around in a stroller, and started cussing out Ciara on a radio show for involving their son in “publicity stunts.” Future also took to hissing at Ciara on Twitter, like accusing her of taking $15,000 a month in child support while making him go though lawyers to see their son. Ciara is finally responding to Future, and she’s doing it by coming for a lot more than $15,000 a month.

According to the details of the lawsuit, Ciara swatted back at Future’s accusations that she’s keeping their son from him by saying that she goes out of her way to make sure Future Jr. sees his daddy. Ciara claims that they’ve had at least 19 visitations since December 2014, one of which happened as recent as last week. She’s also accusing Future of starting shit as a way to promote his music.

Ciara’s lawsuit says that she wants all the nasty words Future wrote about her erased from Twitter and wants him blocked from saying anything else about her. She’s also looking for Future to stuff $15 million into her bank account. And just like that, the price of EVOL was marked up to $89.99 on iTunes and now includes a bonus track called “Please Please Please Buy This Album (I Need The Money).”

If your name is Future, this would be where you might want to look away (unless you want to make some new tweets that will probably be used against you in court of law). Here’s Ciara and Future Jr. cruising through LAX with Russell Wilson yesterday. 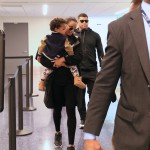 Tags: Bitch Got Sued , Ciara, Future, Russell Wilson, The Drama Of It All
SHARE
Our commenting rules: Don't be racist or bigoted, or get into long-ass fights, or go way off topic when not in an Open Post. Also, promoting adblockers, your website, or your forum is not allowed. And some comment threads will be pre-moderated, so it may take a second for your comment to show up if it's approved.
src="https://c.statcounter.com/922697/0/f674ac4a/1/"
alt="drupal analytics" >