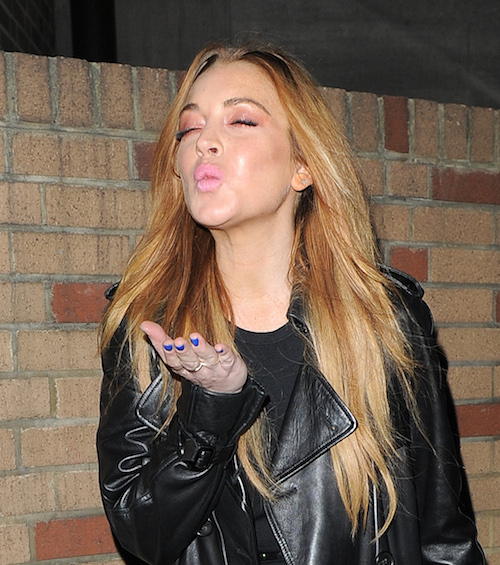 No, you didn’t fall into a time warp that transported back to the ‘passed out in a grey hoodie‘ Lindsay Lohan years. This happened in this year, 2016. According to Radar, Dina Lohan’s two daughters got kicked out of a Manhattan bar on Friday night for acting like two trashy messes. “That’s my girlsssss” burped Dina in between glugs of vodka.

It all started late on Friday night when Lindsay (who I guess is on vacation from her full-time job of yacht hopping and Instagram tea hustling) and Ali Lohan and some of their friends barged into a place called Vbar and ran straight to the bathroom. After 20 minutes, a bartender knocked on the door and asked them to come out. When they wouldn’t come out, the bartender told them they had to leave, and that’s when LiLo swung open the door and went full-Lohan.

Rather than slink back out into the street without causing a scene, the Apricot Ashtray became “aggressive and belligerent“, and allegedly started screaming at a West African bartender in a not-right African accent. A source claims LiLo’s eyes were glazed over, and she hissed “This is New York. You’re not from here.” Shockingly, that’s not the trashiest thing that came out of Lindsay’s mouth that night.

“They wouldn’t leave and all hell was breaking loose and that’s when Lindsay spat in our friend’s face. The bar then erupted and everyone was yelling at them to leave.”

Eventually LiLo and Ali left, but they returned a short while later to stand outside the bar and film people with their cellphones, and slam their hands against the windows. But it doesn’t end there! Radar says that half an hour later, one of LiLo’s friends returned to the bar and tried to fight a bartender. When a bar patron started recording it, he grabbed their phone and tried to run off with it. That’s when the police were called, but Lindsay and Ali Lohan were long gone. The bartender denied to press charges against LiLo’s friend.

But what did Lindsay do next? Well, Lindsay responded to this mess by throwing up an inspirational quote to Instagram. Which is sort of ironic, considering the person she spat on will probably throw up every time they remember that time Lindsay Lohan hocked a toxic loogie in their face.

Tags: Ali Lohan, Gross, ICK NAST, Lindsay Lohan
SHARE
Our commenting rules: Don't be racist or bigoted, or post comments like "Who cares?", or have multiple accounts, or repost a comment that was deleted by a mod, or post NSFW pics/videos/GIFs, or go off topic when not in an Open Post, or post paparazzi/event/red carpet pics from photo agencies due to copyright infringement issues. Also, promoting adblockers, your website, or your forum is not allowed. Breaking a rule may result in your Disqus account getting permanently or temporarily banned. New commenters must go through a period of pre-moderation. And some posts may be pre-moderated so it could take a minute for your comment to appear if it's approved. If you have a question or an issue with comments, email: [email protected]
src="https://c.statcounter.com/922697/0/f674ac4a/1/"
alt="drupal analytics" >