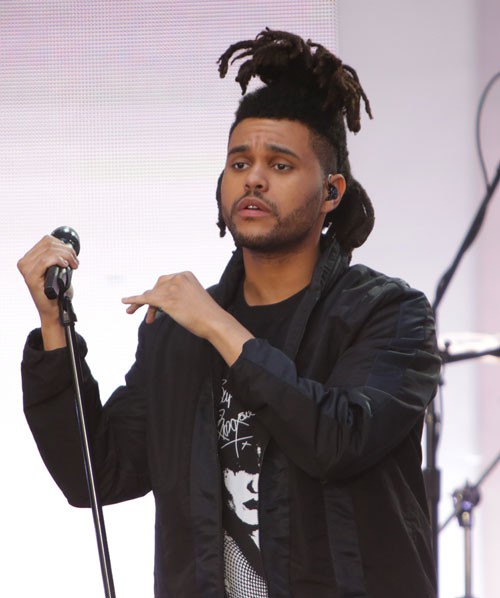 The pineapple mullet hair on top of the head of The Weeknd (government name: Abel Makkonen Tesfaye) is apparently Internet famous and there’s Tumblr’s devoted to it and shit. During an interview with Rolling Stone, The Weeknd (Side note: My spell check just loves his stage name.) explained that four years ago, he decided to let his hair grow however it wants to grow and he’ll only cut it if it gets in his eyes. That led to him telling a weird story about his most bizarre encounter with a celebrity and of course that celebrity was Taylor Swift.

This past February, The Weeknd was at a Grammy after-party for Sam Smith in some fancy mansion in Bel-Air and he says the place was filled with all sorts of famous types and most of them were plastered. The Weeknd chose that month of all months to quit drinking the sweet nectar, so he was the sober trick in a sea of drunk wrecks. He met Taylor Swift at that party and says that while she jacked him off about his music, she touched his hair the entire time…..

“She actually schooled me on my own shit,” Tesfaye says. “She was like, ‘I’ve been listening to ‘The Morning’ [from House of Balloons] for years — it’s one of my favorite songs ever!’ I mean, she might have just Googled it. But she seemed genuine.”

Tesfaye says Swift went on for about 15 minutes. “But the whole time she was talking,” he says, “she was kind of, like, petting my hair? I think she was just drawn to it — she must have been a little gone off a few drinks. And of course I’m not going to be like, ‘Hey, can you stop?’ I mean, it felt good! But when she started petting my hair, that’s when I was like, ‘I definitely need a drink.'”

Taylor told that story before during an interview with the BBC and said that she didn’t remember doing that until The Weeknd brought it up in an e-mail.

Drunk my ass. It sounds like Taylor stole the third e from The Weeknd’s name and swallowed it. That’s some rolling type behavior. But no, petting someone’s hair without permission is not right. That party wasn’t a petting zoo, Taylor didn’t have a bunch of hay in her hand and The Weeknd isn’t a damn goat. The Weeknd did get off lucky, though. Because usually when Tay Tay pets a man’s hair, she quickly yanks a chunk out so she can make a doll out of it for her “collection.”

Tags: Drunks, Taylor Swift, The Weeknd
SHARE
Our commenting rules: Don't be racist or bigoted, or post comments like "Who cares?", or have multiple accounts, or repost a comment that was deleted by a mod, or post NSFW pics/videos/GIFs, or go off topic when not in an Open Post, or post paparazzi/event/red carpet pics from photo agencies due to copyright infringement issues. Also, promoting adblockers, your website, or your forum is not allowed. Breaking a rule may result in your Disqus account getting permanently or temporarily banned. New commenters must go through a period of pre-moderation. And some posts may be pre-moderated so it could take a minute for your comment to appear if it's approved. If you have a question or an issue with comments, email: [email protected]
src="https://c.statcounter.com/922697/0/f674ac4a/1/"
alt="drupal analytics" >