Lamar Odom Was Moved From Las Vegas To A Hospital In L.A. 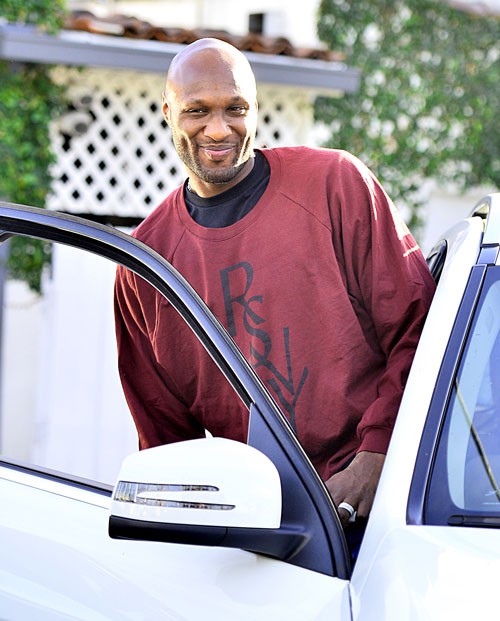 Since Lamar Odom has miraculously come out of a coma and is doing much better after reportedly overdosing in that Nevada whore house, he was well enough to be airlifted by helicopter from Sunrise Hospital to Cedars-Sinai in Los Angeles last night. Lamar’s family said in a statement that he already took his first steps. As we all scream, “It’s a miracle!”, Pimp Mama Kris is probably down in the PR headquarters in her lair high-fiving all her publicist minions for the good job they did feeding exaggerated stories to the media to maximize the drama.

People says that Lamar has checked into the ICU at Cedars and he’s breathing on his own, but some of his insides are still jacked up. People also let us know for the ten millionth time that his estranged wife Khloe Kartrashian hasn’t left his side once and traveled with him to L.A. Even if Lamar can breathe on his own, he’s probably using an oxygen mask a lot, because he can’t take the scent of wookie caca wafting off of Khloe since she hasn’t even left his side to use the toilet!

TMZ says that Lamar was moved to Cedars so he can get better specialized care. Many of his organs are getting stronger, but his kidneys have pretty much checked out and are done. He’s doing 6 hours of dialysis a day, but he’s probably going to need a transplant. We all know how this is going to play out. One of the Kartrashians is going to HEROICALLY give Lamar one of her kidneys. That’s if they all haven’t had their kidneys lipo’d out since waist training can only do so much.

And TMZ also says that Khloe has pressed the pause button on her relationship with her current piece James Harden, because she needs to devote all her time to nursing Lam Lam back to health like the Khloence Knightingale she is. I’m sure James Harden understands. Sometimes when you “date” a Kartrashian, you have to let them go and follow their heart and by that I mean you have to let them go to where the storylines, ratings and cameras are.

Tags: Khloe Kardashian, Lamar Odom
SHARE
Our commenting rules: Don't be racist or bigoted, or post comments like "Who cares?", or have multiple accounts, or repost a comment that was deleted by a mod, or post NSFW pics/videos/GIFs, or go off topic when not in an Open Post, or post paparazzi/event/red carpet pics from photo agencies due to copyright infringement issues. Also, promoting adblockers, your website, or your forum is not allowed. Breaking a rule may result in your Disqus account getting permanently or temporarily banned. New commenters must go through a period of pre-moderation. And some posts may be pre-moderated so it could take a minute for your comment to appear if it's approved. If you have a question or an issue with comments, email: [email protected]
src="https://c.statcounter.com/922697/0/f674ac4a/1/"
alt="drupal analytics" >