The real-life Bernadine from Waiting To Exhale has been found!

According to MediaTakeOut and UsWeekly, the alleged side pieces of NY Giants wide receiver Victor Cruz all got a lovely little text message from Elaina Watley, his fiancee and mother of his 3-year-old daughter. Elaina supposedly gathered up all of Victor’s hos and introduced herself to them and each other in one beautiful group text message. MediaTakeOut claims they got a screen shot of the text message from a woman who was on the group list. I wish Elaina didn’t put Victor on the list and didn’t tell him she knew about his harem of mistresses, because she could’ve joined forces with them to pull a John Tucker Must Die on his ass. Big Mistake! 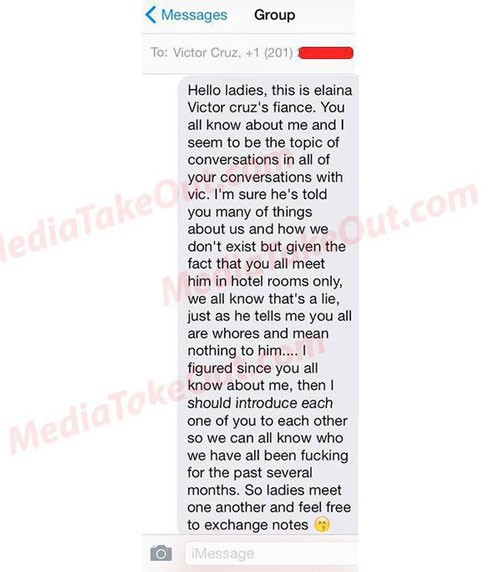 Elin Nordegren would’ve done the same thing if she had 4 interns and 3 assistants. Because that’s how many people it would’ve taken to gather up the cell phone numbers of all 500 of Tiger Wood’s hos.

MediaTakeOut is known for serving up pure fanfiction, but UsWeekly verified that text as 100% authentic. No, they didn’t get a confirmation from Victor Cruz or Elaina Watley. A trick that Victor met on Instagram and almost passed his peen to claims he told her it’s real. Sounds legit.

One of the women he’s had contact with — who did not receive said group text — told Us how she confronted the Giants wide receiver after seeing the screenshots online.

“I sent it to him and asked him what it was about and he said, ‘Exactly what it reads,'” the woman, who lives in Texas, tells Us.

“He then said some of it was true and some was fake, and when I asked what was fake he said, ‘Does it matter?’” the woman adds to Us. “He’d tell me him and his fiancee were broken up and just keeping up appearances. I never believed him.”

What’s really surprising is that Victor texted that woman back. I’m surprised that his phone didn’t shake and catch on fire after all of his side pieces texted him with a million devil Emojis.

And who knows if Elaina is going to stick with that huge slut or dump him, but I do know that her transformation into the real-life Bernadine will be complete if she burns his car in the front yard.

Tags: Well Well Well
SHARE
Our commenting rules: Don't be racist or bigoted, or post comments like "Who cares?", or have multiple accounts, or repost a comment that was deleted by a mod, or post NSFW pics/videos/GIFs, or go off topic when not in an Open Post, or post paparazzi/event/red carpet pics from photo agencies due to copyright infringement issues. Also, promoting adblockers, your website, or your forum is not allowed. Breaking a rule may result in your Disqus account getting permanently or temporarily banned. New commenters must go through a period of pre-moderation. And some posts may be pre-moderated so it could take a minute for your comment to appear if it's approved. If you have a question or an issue with comments, email: [email protected]
src="https://c.statcounter.com/922697/0/f674ac4a/1/"
alt="drupal analytics" >