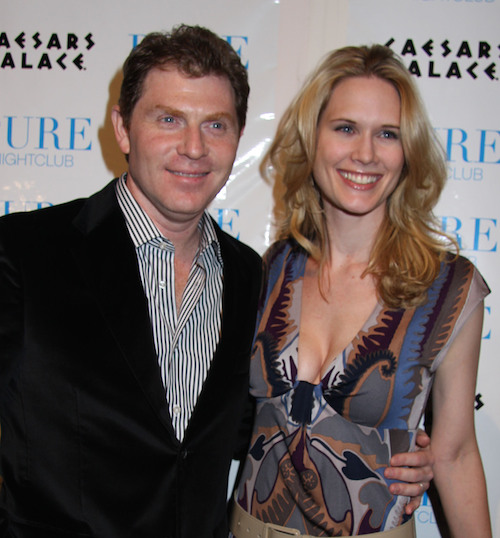 While his leprechaun relatives back home are spending the day chugging celebratory cans of Guinness in honor of Ireland giving the thumbs up to same-sex marriage, the leprechaun chef of New York Bobby Flay is still frantically trying to keep his pot of gold away from his soon-to-be ex-wife Stephanie March.

Last week it was reported that Stephanie was trying to get the prenup she signed back in 2005 thrown in the trash because she claimed she was owed a bunch of money from Bobby for tasting his food and making an iPod playlist for his restaurants. According to TMZ, Stephanie has also added that she felt she was owed more money than they prenup provided ($5,000 a month) because she was frequently sick and couldn’t work. Stephanie says she had a burst appendix and 3 deep infections that prevented her from adding credits to her IMDB page.

But Bobby swatted back at Stephanie’s attempt to #getmoneybitch by telling a judge her infections were the result of a bad boob job, and therefore, not his problem. He sort of played the same hand fellow Food Network chef Guy Fieri plays when someone gets the barfs after eating his gross food; sort of a “It’s not my fault you ate something called Donkey Sauce” angle. Of course, Stephanie kept the drama going by claiming that Bobby’s alleged cheating have “compromised her health and mental state.”

Christ on Mario Batali’s Crocs, this divorce is getting all kinds of dirty, and it sounds like it’s never going to end. Really, the only way I can see this being settled is if they take this mess to Chopped and let Ted Allen and not-the-one Chopped judge Aarón Sánchez decide who is less of a mess. Your mystery basket ingredients are: a prenup, a print out of sexts between Bobby Flay and a Food Network intern, an apron that smells like chorizo, the saline from a leaky breast implant, and a tub of Fage yogurt. You have thirty minutes to prepare an argument for the judges for why you deserve money. And GO!

Tags: Bobby Flay, Plastic Surgery, Stephanie March, The Drama Of It All
SHARE
Our commenting rules are pretty simple: Don't be racist or bigoted, or go way off topic when not in an Open Post. If you see an offensive or spammy comment you think should be deleted, flag it for the mods and they'll be forever grateful and give you their first born (although, you probably don't want that).
src="https://c.statcounter.com/922697/0/f674ac4a/1/"
alt="drupal analytics" >