I don’t know if that’s actually a look, but it is now. Katy Keene’s closest living relative Dita Von Teese showed up at the amfAR Gala in Cannes today looking like a recently-divorced teacher from Ever After High who has decided to use up all her vacation days on a two week trip to Las Vegas with her best gals, Dottie and Trixie, and I love it. It’s like Alice in Wonderland meets Cry Baby meets a good push-up bra and a box of Clairol Nice n’ Easy #122. I feel like at any moment, a white rabbit is going to pop out of her cleavage and offer me a martini.

She also totally reminds me of one of the bedrooms in my aunt’s old house. My aunt had two fancy guest bedrooms, the white room and the blue room. I didn’t like staying in the white room because there were two old Raggedy Ann dolls that freaked me out, so I always picked the blue room. The blue room was opulent as hell; it was like Versailles farted on Liberace. Everything was covered in blue satin and embroidered with fancy beads and tassels and various decorative shim-shams. It was a wash-your-hands-twice-and-don’t-touch-nothing kind of room.

Basically what I’m trying to get at is that Dita Von Teese looks very classy and all, but she’s missing a decorative bolster pillow placed carefully on her boobs.

Here’s more of Dita at the amfAR Gala in Cannes, as well as a bunch of other fancy dressed famous types, like Rita Ora, Adrien Brody, the tallest of the Kalabasas Klan, and Robin Thicke. Yes, Robin Thicke is still getting invited to things. 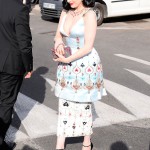 Tags: Adrien Brody, Dita Von Teese, Eva LongWHORIA, Karlie Kloss, Kendall Jenner, Paris Hilton, Rita Ora, Robin Thicke, Sienna Miller, Toni Garrn
SHARE
Our commenting rules: Don't be racist or bigoted, or post comments like "Who cares?", or have multiple accounts, or repost a comment that was deleted by a mod, or post NSFW pics/videos/GIFs, or go off topic when not in an Open Post, or post paparazzi/event/red carpet pics from photo agencies due to copyright infringement issues. Also, promoting adblockers, your website, or your forum is not allowed. Breaking a rule may result in your Disqus account getting permanently or temporarily banned. New commenters must go through a period of pre-moderation. And some posts may be pre-moderated so it could take a minute for your comment to appear if it's approved. If you have a question or an issue with comments, email: [email protected]
src="https://c.statcounter.com/922697/0/f674ac4a/1/"
alt="drupal analytics" >