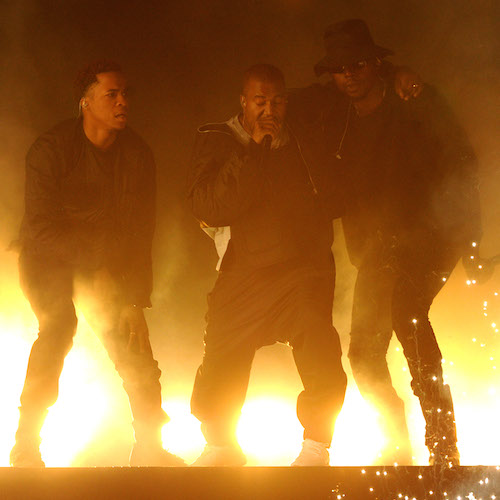 And now we know what it looks like when Kris Jenner calls her son-in-law into the Kardashian Khompound’s “lower office” for a business meeting.

According to TMZ, Dr. Kanye West is very very mad at the Billboard Music Awards. So mad. Madder than his wife after discovering Botox no longer makes suppositories for on-the-go sphincter wrinkle removal. Kanye is mad at Billboard for censoring the hell out of his performance on Sunday night. A “source” claims Kanye gave the producers the lyrics to “All Day” and “Black Skinhead” exactly how he planned on performing them, and there weren’t that many no-no words. But they still went ahead and hit the mute button on a good chunk of his audio, including lyrics like “my leather black jeans on” and “Middle America.” How dare they! Don’t they know how important Kanye West thinks Kanye West is?

Not surprisingly, Kanye released a statement through his publicist on Tuesday swatting at ABC for allowing the Billboard Music Awards to silence his genius.

“Kanye West was grossly over-censored at the Billboard Music Awards. Non-profane lyrics such as ‘with my leather black jeans on’ were muted for over 30-second intervals. As a result, his voice and performance were seriously misrepresented. It is ridiculous that in 2015, unwarranted censorship is something that artists still have to fight against. Although West was clearly set up to face elements beyond his control during the live broadcast, he would like to apologize to the television audience who were unable to enjoy the performance the way he envisioned.”

His voice was misrepresented? Are you kidding? That might have been the best I’ve heard Kanye West sound in years! I’m so used to a non-stop stream of asshole-isms and egotistical thought farts pouring out of his talk hole that hearing him say nothing was actually a nice change of pace. Not to mention all that silence gave me a chance to focus and reflect on the sound that truly mattered: that beautiful symphony of boos.

Tags: Bitch Fights, Kanye West, You Pissed Somebody Off
SHARE
Our commenting rules are pretty simple: Don't be racist or bigoted, or go way off topic when not in an Open Post. If you see an offensive or spammy comment you think should be deleted, flag it for the mods and they'll be forever grateful and give you their first born (although, you probably don't want that).
src="https://c.statcounter.com/922697/0/f674ac4a/1/"
alt="drupal analytics" >