Because Cannes is a truly formal and sophisticated event that only lets in the most refined and elegant swans (see: the piece of trash above), they have a seriously strict dress code and will spit on any pair of lady feet that aren’t propped up on a high heel. So if you’ve got medical issues and wearing high heels kills your feet and makes you walk like a constipated penguin, suck it up, trick! Put on those high heels and fake smile through the pain, because you gotta get into Cannes! If you have no legs, strap a high heel to your head or wear them on your hands, because rules are rules and you gotta get into Cannes!

Screen Daily (via BBC) says that at a Cannes screening for Carol, several women were told to take themselves and their trashy flats elsewhere, because only ladies in high heels are allowed in. Apparently, several of the women who were told to get the fuck out were older and had medical issues. It’s not like the women were wearing unholy symbols of ugliness like CROCs. They were wearing fancy flats. One Cannes regular told Screen Daily that the festival seems to be flats-o-phobic, because they’ve heard of this kind of foolery happening several times.

Asif Kapadia, the director of the Amy Winehouse documentary, tweeted about how his wife nearly got denied from a screening for wearing flats. She was eventually let her in.

A spokeswhore for Cannes tells the BBC that they’ve had the same dress code for years and they didn’t totally deny being anti-flats, but they did say that there’s nothing in the rules about the height of heels:

“Rules have not changed throughout the years (tuxedo, formal dress for gala screenings) and there is no specific mention about the height of the women’s heels as well as for men’s.”

1. I am only okay with the high heels rule IF they go one step (not punned on purpose) further and specify that the ONLY shoe allowed on the red carpet is an exquisite Lucite heel. In other words, Shauna Sand should be the only human allowed into Cannes.

2. Yes, that rule is dumb BUT it does keep Tom Cruise out of Cannes. A forest of towering women in high heels is Tommy Girl’s living nightmare.

Also, at a press conference for Sicario this morning, Emily Blunt spit on that rule and both Benicio Del Toro and Josh Brolin said that they would protest against it by wearing high heels to their movie’s premiere tonight. Benicio should take his protest all the way. Since dudes have to wear fancy suits or tuxedos, he should show up wearing nothing but high heels and the words “FUCK CANNES” written on his ass cheeks. Well, written in rhinestones, of course, because he should still keep it a little fancy. 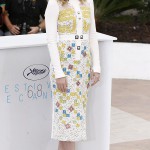 Tags: Benicio Del Toro, Emily Blunt, I Don't Like Jokes, Josh Brolin, Stupid Shit
SHARE
Our commenting rules: Don't be racist or bigoted, or get into long-ass fights, or go way off topic when not in an Open Post. Also, promoting adblockers, your website, or your forum is not allowed. And some comment threads will be pre-moderated, so it may take a second for your comment to show up if it's approved.
src="https://c.statcounter.com/922697/0/f674ac4a/1/"
alt="drupal analytics" >