Open Post: Hosted By The Beaver On John Travolta’s Head While wearing the hell out of the only kind of beaver he’ll let that close to his face, John Travolta once again showed Beyonce up in the wig department when he graced the FOX Upfronts in NYC with his beautiful presence on Monday. John and the dead Get Along Gang cast member on his head were at the FOX Upfronts to represent FX’s American Crime Story: The People vs. O.J. Simpson with Sarah Paulson, Cuba Gooding Jr., Courtney B. Vance and David Schwimmer. The Daily Mail calls the extra-long merkin on John’s dome a “mullet,” but I don’t think that’s a mullet. I don’t really know what to call it except for WTF. But I do know that the next time I’m driving down the street and I see some poor roadkill lying on the side, I’m going to assume that John’s beauty team isn’t far behind and they’re going to scoop it up, skin it, line it, slap it on their boss’ head and call it good. John needs to shave that wig down and add a few mini Bump-Its to the top. Then he needs to take those shaved-off wig scraps and glue them over his eyebrows, because you can’t be Robert Shapiro unless your eyebrows look like two obese otters sniffing for food. 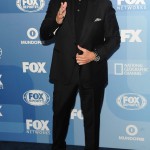