George Clooney Talked About How Great Amal Clooney Is For The 7,254th Time 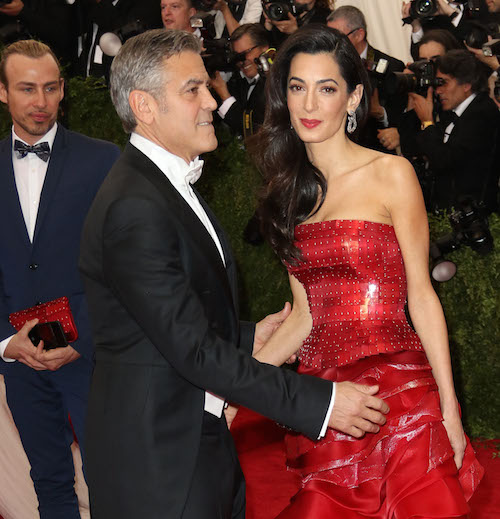 That guy standing behind them is making the same face I make whenever George Clooney busts a verbal love nut over Amal Clooney. It’s the face that says “So we’re doing this again, I see.” Nipple Suit Batman recently spoke to Entertainment Tonight about that Disneyland movie he’s in, and of course the conversation turned to his fancy lawyer wife. No, they didn’t ask if Amal has ever hurled on Space Mountain (I wish). Nancy O’Dell asked if one of the reasons George fell in love with Amal is because she wants to make a difference in the world, and George answered:

“Well, there’s a lot of reasons. She’s an amazing human being and she’s caring. And she also happens to be one of the smartest people I’ve ever met. And she’s got a great sense of humor. There’s a number of reasons why. I’m always very proud of her when I see her speaking at the International Court of Appeals in Strasbourg, you know, with her robe on. It’s very impressive.”

And that’s not the first time this week he pulled out his Chapstick, rimmed his lips three times, puckered up and left a trail of greasy kisses all over Amal’s ass. George also did the same thing on Extra, but this time he kept it about how good Amal looks in clothes.

“From the day I met her, she has the incredibly eclectic, sort of wild style. She just has her own style, she doesn’t have a stylist or anything, she just picks clothes. She shows up, and I’m like, that’s unbelievable, she’ll tell me she’s gonna wear some dress, then I see it and I’m like, wow, that’s stunning.”

I’m sure George will continue to spread the good news of Amal Clooney by making his way through every celebrity news show. Today it’s ET and Extra, tomorrow it’s Access Hollywood and The Insider. Then he’ll go back in time to 1993 and appear on A Current Affair. Then he’ll go back even further to 1973 and star in a variety show called Amal Yours, Baby!. Actually, I would totally watch that.

Tags: Amal Clooney, George Clooney, Good God Girl Get A Grip
SHARE
Our commenting rules are pretty simple: Don't be racist or bigoted, or go way off topic when not in an Open Post. If you see an offensive or spammy comment you think should be deleted, flag it for the mods and they'll be forever grateful and give you their first born (although, you probably don't want that).
src="https://c.statcounter.com/922697/0/f674ac4a/1/"
alt="drupal analytics" >