Open Post: Hosted By The Best Dressed At The MTV Movie Awards The MTV Movie Awards are a thing that still happen and they’re happening tonight. I skimmed through the list of performers and presenters and wondered where in the hell is the glamour and star power? Well, the answer nearly slapped my retinas off when I was trolling through pictures and got to the pictures of demure Chinese-American orchid Bai Ling making camera lenses salivate by serving up trampy dragon sexiness. I don’t know why I just noticed this, but when push Bai Ling’s name together you get “bailing,” which is what most of the presenters are going to do after seeing this exquisite perfection. How can they compete with this seat-filling glamour?

Bai Ling looks like a hooker who was working the day-shift on the corner when a Chinese New Year parade dragon lost control and slammed into her. Yes, the people sitting behind her are going to get their eyes poked out by that dragon’s razor sharp mane, but who cares? That’s a small price to pay to be that close to Bai Ling. 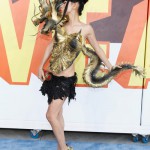 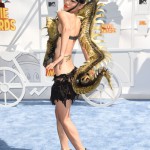 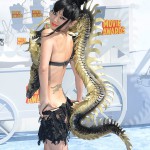