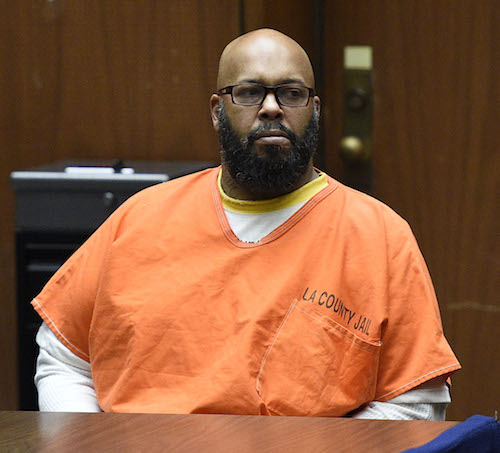 Uh oh. You in danger, person who court appointment that wheelchair; we all know what happens when someone pisses off Suge Knight.

Ever since Suge Knight was charged with murder back in February, the Associated Press says he’s had four in-court whoopsies that involved him either collapsing or his body just saying “fuck it”. So a judge decided that all his future court appearances would be made in a wheelchair. And to make sure he doesn’t try to get up and walk away, he’s been chained to it. Sort of like the drunken backseat baby of Wheelchair Jimmy and Hannibal Lecter, I guess.

Of course, Suge Knight fucking hates being chained to a wheelchair. During a recent court appearance that shockingly had nothing to do with him running a dude down with his car (it was regarding a robbery charge for taking a pap’s camera), Suge’s attorney told the judge that he was fine to walk and that putting him in a wheelchair was “humiliating”. The judge then said that until he’s declared fit to walk, he’s staying in the chair.

One of the reasons Suge is making visits to court is because he used a set of wheels for evil, so is it really a good idea to put him in another set of wheels? I know it’s just a wheelchair, but trust me – Suge will find a way. Maybe they could get him a Yoshi to ride on? All of a sudden, every creature in the Mushroom Kingdom just got very scared.

Tags: Suge Knight, You Pissed Somebody Off
SHARE
Our commenting rules: Don't be racist or bigoted, or get into long-ass fights, or go way off topic when not in an Open Post. Also, promoting adblockers, your website, or your forum is not allowed. And some comment threads will be pre-moderated, so it may take a second for your comment to show up if it's approved.
src="https://c.statcounter.com/922697/0/f674ac4a/1/"
alt="drupal analytics" >