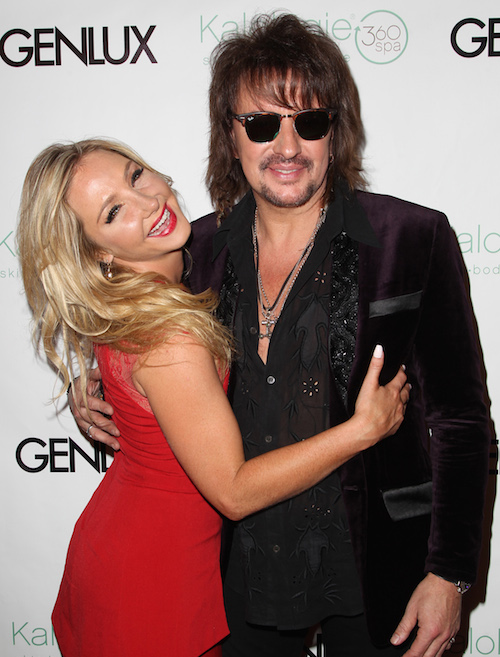 Must…not…make…a…”You Give Love A Bad Name“…joke. The NY Daily News says that former Bon Jovi guitarist and current candidate for anger management classes Richie Sambora is in trouble for allegedly threatening to kill his ex-girlfriend and former business partner Nikki Lund. According to a police report filed by Nikki Lund on April 1st, it all went down last month during a phone call made the day after the launch of their joint clothing line, Nikki Rich. Rather than calling to congratulate her, Nikki claims Richie threatened to “dig a hole in the desert and bury” her. The Los Angeles County Sheriff’s Office says they’re investigating this mess.

However, TMZ says that a rep for Richie Sambora is side-eying Nikki Lund’s claims, because they say that shit never happened. Richie admits that he did talk to Nikki on the phone, and that the only thing he was threatening to kill was their clothing line. Richie’s rep claims that Nikki was the one attacking him on the phone that day because she was pissed that he was pulling out of their clothing business and taking his money with him. Apparently he’d lost $4 million on Nikki Rich and he didn’t want to lose anymore.

Damn, all this drama over some Topshop-looking shirts and skirts? The next time Richie Sambora gets angry enough to allegedly threaten to dig a hole in the desert and put someone in it, he should sit his ass down and listen to “Bed Of Roses” from start to finish. Nothing will calm a high-strung trick’s nerves better than hearing Jon Bon Jovi busting out a sexy power ballad.

Tags: I Don't Even Know, Lawyer Up
SHARE
Our commenting rules are pretty simple: Don't be racist or bigoted, or go way off topic when not in an Open Post. If you see an offensive or spammy comment you think should be deleted, flag it for the mods and they'll be forever grateful and give you their first born (although, you probably don't want that).
src="https://c.statcounter.com/922697/0/f674ac4a/1/"
alt="drupal analytics" >