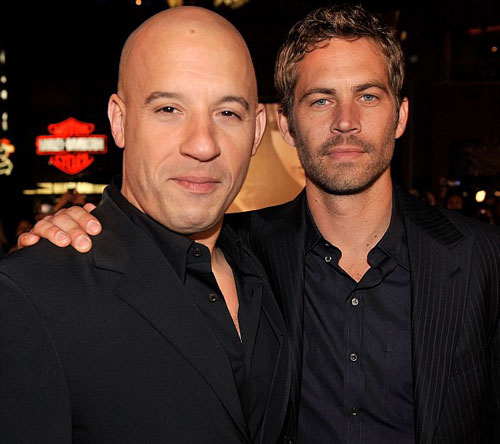 The muscled-up sensitive chanteuse became a third-time daddy last week when his girlfriend Paloma Jimenez birthed out their daughter. They already have a 6-year-old daughter named Hania and a 4-year-old son named Vincent together. Vin didn’t immediately slip out his third kid’s name, but while promoting Fast and Furious I Lost Track Of What Number They’re On during an interview with Natalie Morales for Today, he told her his daughter’s name.

I was secretly hoping that Vin (born name: Mark Vincent Sinclair) would pay tribute to himself with his daughter’s name by naming her Vinilla Diesel. (Note: I’m pretty sure Vinilla Diesel is the name of a Sativa strain that my local weed shop sells.) Vin didn’t name his daughter Vinilla Diesel, because he named her after his late soul brother and friend Paul Walker. Vin said this to Natalie:

“I’m telling you this, because I love you, Natalie. You know I really do. I know you’re a good soul and I know that this is in good hands. But while I was in the hospital… The name that I will give you is… I named her Pauline. There’s no other person that I was thinking about as I was cutting the umbilical cord. I knew he was there and it felt like a way to keep his memory a part of my family, a part of my world.”

So Vin is holding his newborn baby in front of Paloma who was probably spread-eagle and huffing and puffing because she just gave birth to a human, and he thinks of Paul Walker? What is Paloma? The chopped liver who just carried his kid for 9 months and gave birth to her! No, I know what Vin meant and naming his daughter after Paul is sweet and touching. Paul is probably always with Vin, which is why Paloma didn’t think it was weird when he shouted, “This one’s for you, brotha,” as he shot the load of baby batter that knocked her up.

Tags: Baby Names, Paul Walker, Sweet Things, Vin Diesel
SHARE
Our commenting rules: Don't be racist or bigoted, or post comments like "Who cares?", or have multiple accounts, or repost a comment that was deleted by a mod, or post NSFW pics/videos/GIFs, or go off topic when not in an Open Post, or post paparazzi/event/red carpet pics from photo agencies due to copyright infringement issues. Also, promoting adblockers, your website, or your forum is not allowed. Breaking a rule may result in your Disqus account getting permanently or temporarily banned. New commenters must go through a period of pre-moderation. And some posts may be pre-moderated so it could take a minute for your comment to appear if it's approved. If you have a question or an issue with comments, email: [email protected]
src="https://c.statcounter.com/922697/0/f674ac4a/1/"
alt="drupal analytics" >