If I was casting the role of Nicole Brown Simpson’s fame whore friend Faye Resnick, my list of possibilities would look like this:

1. Jessica Lange since she can do it all.

4. Ron Perlman as his Beauty and the Beast character.

5. A pristine dew drop on the petal of a daisy right after spring’s first rain.

Faye Resnick was Nicole Brown Simpson’s friend and stayed at her condo until 4 days before she and Ron Goldman were murdered. Faye moved out and checked herself into rehab for an addiction to Lohan powder. O.J. Simpson’s defense team burped up a theory about how Nicole and Ron were murdered by drug dealers who were looking for revenge after Faye failed to pay them the money she owed. Fame Whore Faye helped write two books about the Simpson murder trial. Faye also posed with her nipples out in Playboy a couple of years after the trial. She nows works as an interior decorator and sometimes pops up on The Real Housewives of Beverly Hills as Kyle Richards’ plasticized guard dog.

Connie (that’s Rayna from Nashville to me and Tami Taylor to those of you hos who watched Friday Night Lights) was in the first season of American Horror Story.

This is the strangest cast and I love it. It has all the makings of a camp classic. Seeing a de-wigged John Travolta grill Connie Britton as she’s covered in forty layers of lead-based paint and lip liner for days is going to be the new meaning of life. Let’s just hope that Ryan Murphy keeps the inspired casting coming by hiring Richard Kline to play Pimp Mama Kris.

Here’s the morally corrupt Faye Resnick (copyright: Camille Grammer) with Camille and Kyle Richards at some event in Las Vegas on Friday night. 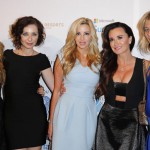 Tags: Connie Britton, Crazy, From The Department Of Random, Real Housewives Of Beverly Hills, Ryan Murphy
SHARE
Our commenting rules: Don't be racist or bigoted, or post comments like "Who cares?", or have multiple accounts, or repost a comment that was deleted by a mod, or post NSFW pics/videos/GIFs, or go off topic when not in an Open Post, or post paparazzi/event/red carpet pics from photo agencies due to copyright infringement issues. Also, promoting adblockers, your website, or your forum is not allowed. Breaking a rule may result in your Disqus account getting permanently or temporarily banned. New commenters must go through a period of pre-moderation. And some posts may be pre-moderated so it could take a minute for your comment to appear if it's approved. If you have a question or an issue with comments, email: [email protected]
src="https://c.statcounter.com/922697/0/f674ac4a/1/"
alt="drupal analytics" >