During Kanye West’s lecture series on egotistical tricks with chronic narcissistic personality disorder at Oxford University last week (working title: Kanye’s Thoughts), Kanye claimed that he has a super-special friendship with President Barack Obama by saying “Obama calls the home phone, by the way.” However, during an appearance on Jimmy Kimmel Live! on Thursday night, President Obama sort of pulled a Mimi-style I don’t know him by saying that he’s only met Kanye twice and he doesn’t think he has his home phone number, thus confirming that Kanye is still a giant ball of delusional crazy and all is right with the world.

Since it’s impossible to take a hint when your hands are busy jerking yourself off 24-7, Kanye continued to act like he was best friends with the President yesterday when TMZ ran into him at LAX. Except this time he changed his story from “Obama calls the home phone” to “He called our house before“. He also said he loves Obama and joked to the paps “Don’t try to pit us against each other.”

Hmmm, who to believe, who to believe. On the one hand, I too would be deeply embarrassed to admit that I ever voluntarily called Kanye West to chat. On the other hand, it’s Kanye West and 99.9% of the words that leave his mouth hole are delusion-dipped lies. I’m going with Obama on this one. Although, Kanye could be telling the truth. Does anyone know the name of Kim Kardashian’s daily filler injector…sorry, “dermatologist”? If it’s Dr. Pras Idento-Bahmah, then we all owe Kanye an apology.

Of course, that’s not the only dumb shit Kanye said this week. During a recent interview with Clique (via People), Kanye shat out some verbal shit about hookers and how he’s basically Santa Claus with a superiority complex:

On how buying a $3800 jacket that might not be the right kind of $3800 jacked is on the same level as making a baby with a prostitute:
“When I was young, I was really scared to walk into luxury stores, too. It’s very non-inviting and it’s very expensive. Like, fuck if you’re not knowledgeable you can make a very expensive mistake—an extremely, like, it’s bordering on getting a prostitute pregnant or something like that.”

On how how North West’s toys are far better than the toys of the regulars:
“I gave my daughter these toys and I was complaining about some of the toys that my daughter had and I was saying these toys don’t have enough quality, soul, life, energy in them. Then Vanessa Beecroft bought her these wolves that were very life-like and when my daughter saw them she started screaming and running around and was the happiest I’d ever seen her.”

I’m still not sure what Kanye meant by that “getting a prostitute pregnant” comment. Was that a subtle swipe at his wife? And the toy thing is just stupid, because we all know that kids are dumb and will play with just about anything. When I was a kid, there was a time where my favorite toys were cocktail napkins and a stick. A STICK. Although I’m sure Kanye would find a way to take a stick and repurpose it as some kind of $216 high-end wooden inspiration rod for petite adults. 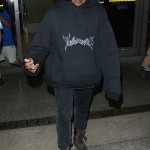 Tags: Kanye West, Kim Kardashian, President Obama, The Delusion Is Thick, You Would
SHARE
Our commenting rules: Don't be racist or bigoted, or get into long-ass fights, or go way off topic when not in an Open Post. Also, promoting adblockers, your website, or your forum is not allowed. Due to spambot attacks, a comment containing a link may need to be approved by a moderator before it's published. And some posts may be pre-moderated so it could take a minute for your comment to appear if it's approved.
src="https://c.statcounter.com/922697/0/f674ac4a/1/"
alt="drupal analytics" >