If life is Pretty Woman, then we are all Vivian Ward and Kanye West is the snobby blonde saleslady.

Okay, so remember earlier this week when Kim’s Kurrent Husband gave a next-level bonkers lecture at Oxford University and said “Clothing should be like food. There should never be a $5000 sweater. You know what should cost $5000? A car” and we were all “That’s rich coming from the same asshole who tried to sell a plain white t-shirt for $120“. Well, High Snobriety (via Refinery29) has the pricing information from Kanye’s recent Mugatu-meets-a bootleg DVD copy of Center Stage fashion collection for Adidas and – surprise surprise – it’s as expensive as hell.

“Entry level” pieces like hoodies and sweatshirts start at around $420. Knitwear, like the hole-covered sweaters above, range between $860 to $1600. Outerwear, like the camo jacket Kim Kardashian wore to the show, will start around $1700 and go up to $3800. Footwear starts at $200; Kanye’s version of a duck boot is almost $500. High Snobriety says that Kanye’s shitty klothing is priced so high because it’s all made in Italy at some of the world’s best factories using the finest material. It’s true! I heard the wool used to make Kanye’s ripped-up sweaters comes from a rare imported sheep-creature native to a faraway galaxy called oh wait no, it comes from a normal fucking sheep.

I stopped I CAN’T-ing with Kanye a long long time ago, but this is too damn much. It’s one thing to sell a jacket for nearly $4000 and be like “whatever, it’s $4000 – deal with it”,  but to rant about clothing being too expensive and how society is lead by greedy types and that cars should cost $5000 and how there should never be a $5000 sweater is BEYOND. Is Kanye that much of a delusional out-of-touch asshole that he thinks $5000 for a sweater is too much, but $1600 isn’t? Wait, don’t answer that – I already know the answer.

Speaking of things that cost a lot of money and look cheap as hell, here’s Kanye’s My Size Tiffany Taylor doll in Paris earlier today wearing a pair of grey stretch pants that make her ass look like a low-budget Cloud Gate (no offense to Anish Kapoor): 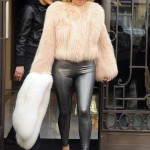 Tags: Asshole-types, Kanye West, Kim Kardashian, Wait WHAT?, You Would
SHARE
Our commenting rules: Don't be racist or bigoted, or post comments like "Who cares?", or have multiple accounts, or repost a comment that was deleted by a mod, or post NSFW pics/videos/GIFs, or go off topic when not in an Open Post, or post paparazzi/event/red carpet pics from photo agencies due to copyright infringement issues. Also, promoting adblockers, your website, or your forum is not allowed. Breaking a rule may result in your Disqus account getting permanently or temporarily banned. New commenters must go through a period of pre-moderation. And some posts may be pre-moderated so it could take a minute for your comment to appear if it's approved. If you have a question or an issue with comments, email: [email protected]
src="https://c.statcounter.com/922697/0/f674ac4a/1/"
alt="drupal analytics" >