Open Post: Hosted By Michael Keaton Putting His Speech Away After Losing The Oscar :( What does “an abandoned puppy sitting in the rain,” “an “In-N-Out with a closed sign on it,” and, “an empty bag of the good shit on a Friday night at 11:45 when your local weed shop is closed,” have in common? They are all in the sad file along with Michael Keaton shoving his acceptance speech back into his jacket pocket after losing the Best Actor Oscar to Eddie Redmayne on Sunday night. The Oscars were on Sunday night and it’s Tuesday, but thankfully some people are still analyzing ever piece of it to find stuff to post. Sometime before Cate Blanchett came out to hand over the award for Best Actor, Michael Keaton took his speech out and after the cut is a Vine (via Vulture) of him putting it away as Eddie Redmayne (WHO ROBBED HIM OF THAT WIN) goes on stage. Sadness ahead:

This made Sad Keanu even sadder. It’s okay, Michael Keaton. I’ll console you. I’ll console your son too, because I’m sure he’s also upset. I’ll console you both at the same time. You know, that Vine is just a tiny, minuscule moment in Michael Keaton’s long ass career. Somewhere, Leonardo DiCaprio is lying on a bed of naked bikini models and as he looks at that clip, he thinks to himself, “Story of my ENTIRE life.” 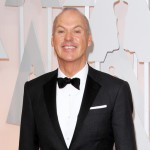