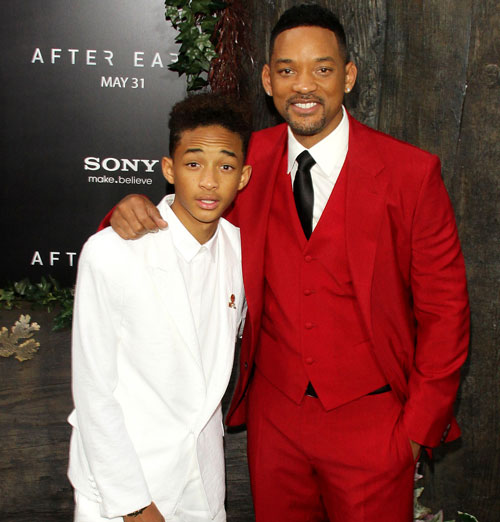 Well, unless you’re some kind of hippie ass ho who doesn’t own any shoes. If that’s the case, then Jaden Smith owns more pairs than you, because he only owns one pair.

In an interview with Esquire magazine’s Scott Raab, Will Smith spit out a few lies. The first lie he told was that he went totally method for Six Degrees of Separation and that’s the last time he’s ever gone method because he ended up falling in love with Stockard Channing real. Yup, bitch was so method that he refused to suck face with another dude on camera even though his character was gay. So method! Will Smith also spit out a saliva stream of potent lies when he said that his son, the greatest philosopher of our time Jaden Smith, doesn’t care about money and only owns one pair of shoes. Yes, Jaden Smith lives in a multi-million dollar mansion and probably smokes imported weed that was grown with the tears of unicorns, but he only owns one pair of shoes and wears the same clothes over and over again.

WS: You never lose the mentality. It’s such a strange thing. Jaden, my sixteen-year-old, he has one pair of shoes.

WS: He has three pair of pants and he has five shirts.

WS: Total. He has refused to be a slave to money. I so respect that. The younger generation is less of an ownership generation, anyway. And it’s such an interesting thing to watch, because I came from a middle-class background, but, you know, our lights and gas would be cut off from not paying the bill. I grew up in a house where you would need the kerosene heaters in the winter in case the bills didn’t get paid. And he’s from the complete other end of the spectrum. And it’s so interesting to me that from growing up in that space, he could see the need for things in a way that he’s rejecting. He’s like, “I’m not gonna let myself need things in that way”—but I would like him to get another pair of shoes.

As Defamer points out, Will Smith is probably full of caca and pure lies since Jaden Smith has been seen wearing more than one pair of shoes. But you know…. Maybe Will Smith doesn’t mean it the way we think he means it. Maybe Jaden Smith has hundreds of pairs of shoes and pants, but he only owns one pair of shoes and three pairs of pants, because they agreed to be owned by him. His other shoes, pants and shirts are their own beings and they belong to themselves. If Jaden wants to wear a pair of Lanvin sneakers in his closet, he goes up to those Lanvin sneakers and asks, “Hi, Lanvin sneakers, would you like to join together and let me wear you?” If the Lanvin sneakers tell him no, he lets them be, because he doesn’t own them. I think that’s in Dianetics somewhere.

And here’s Will Smith with Margot Robbie and his other beard (Jada couldn’t make it) at the London screening of Focus last night. Tags: Jaden Smith, Margot Robbie, Scientology, Why Are You Pulling My Dick?, Will Smith
SHARE
Our commenting rules: Don't be racist or bigoted, or get into long-ass fights, or go way off topic when not in an Open Post. Also, promoting adblockers, your website, or your forum is not allowed. And some comment threads will be pre-moderated, so it may take a second for your comment to show up if it's approved.
src="https://c.statcounter.com/922697/0/f674ac4a/1/"
alt="drupal analytics" >